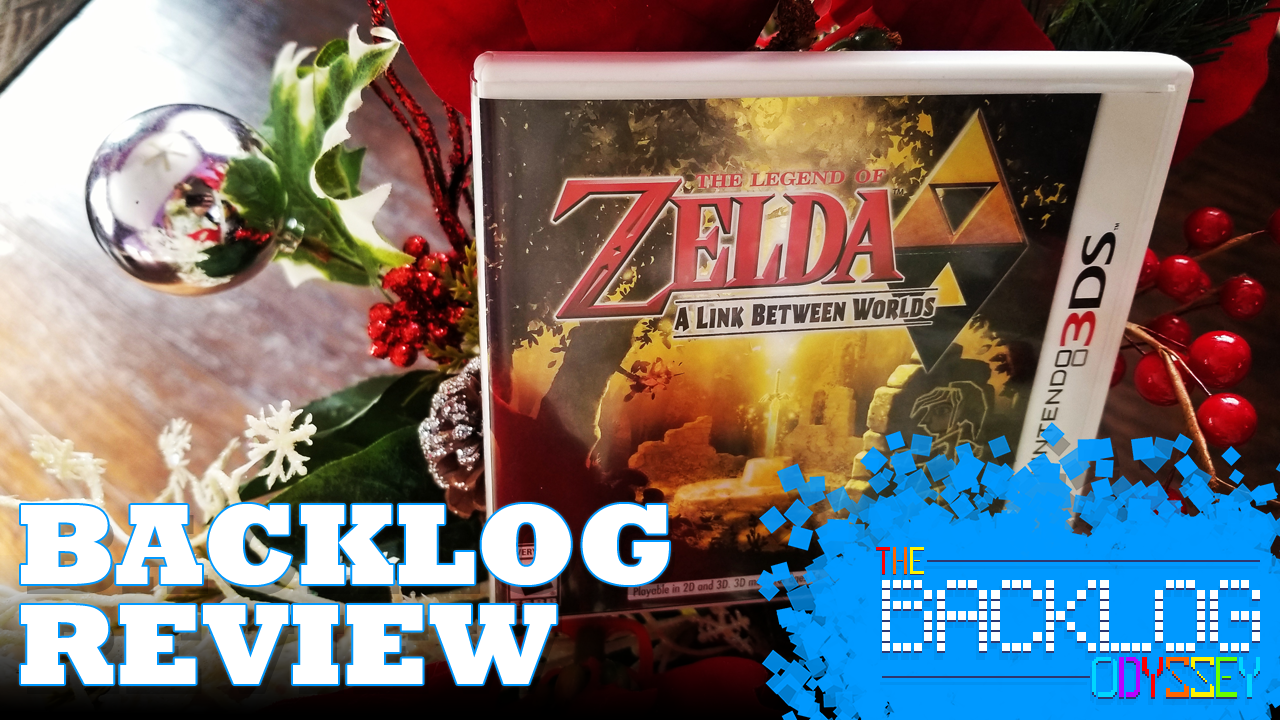 Is A Link Between Worlds a welcome blast from the past or just a link to childhood nostalgia in handheld form?! 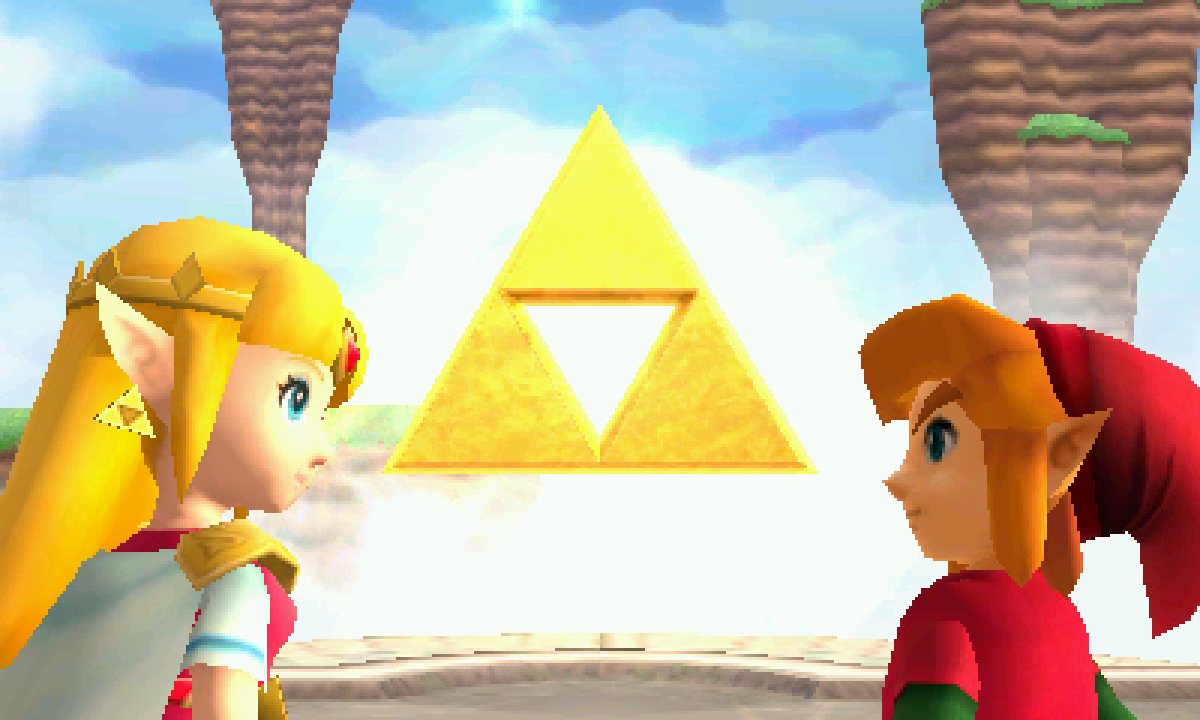 There are few game franchises that have stood the test of time quite like The Legend of Zelda. Not only can the series boast that it solidified and popularized a genre that many have tried to iterate upon. It also redefines itself with each new release and innovates on the gameplay mechanics and world building we’ve all grown to love. That’s why I adore it.

Since I was a kid, there has always been a sense of wonder and excitement when I played a new Zelda game. The same holds true to this day. They offer something familiar and comforting with their colorful graphics and goofy characters. But they also offer depth and complexity that makes exploring their worlds and solving their puzzles exhilarating and fun. I honestly can’t think of a bad game in the franchise. And yes, I am aware of the abominations that were released on the CDi! I just choose to disavow them. 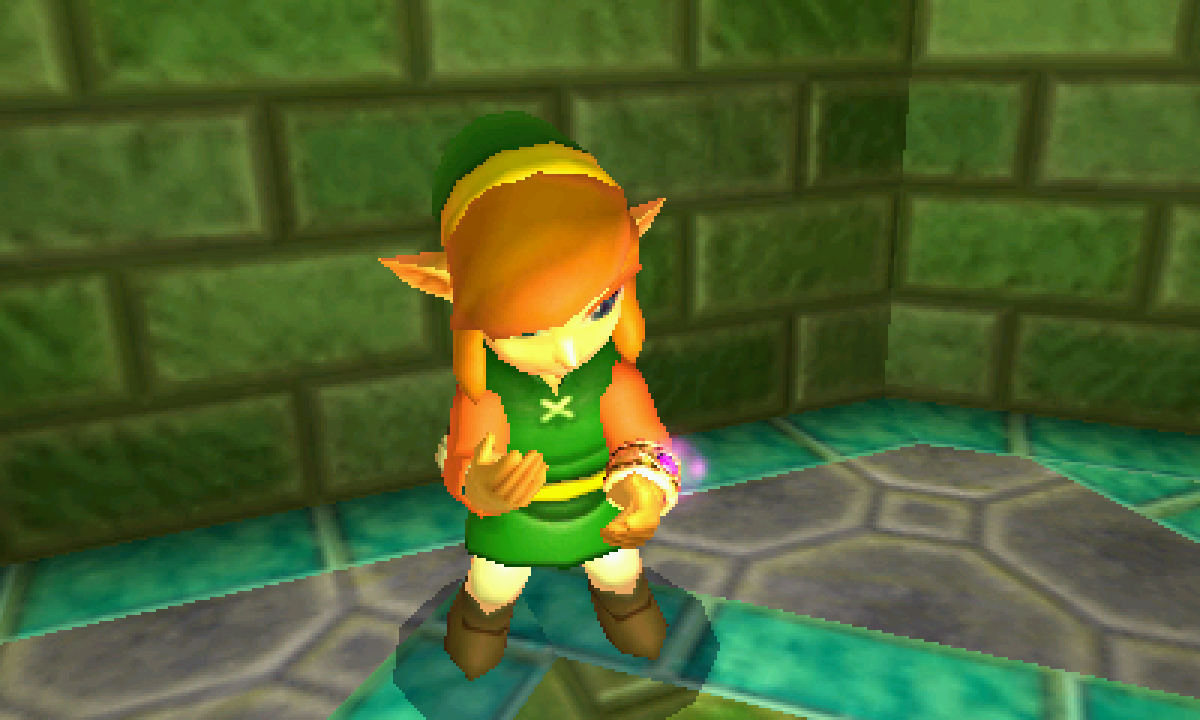 If I was to choose one game in the Zelda series that influenced me the most as a gamer though, it would have to be The Legend of Zelda: A Link to the Past. It was the first Zelda game I ever played and it was the game that made me fall head over heels for that iconic green tunic clad fellow and his grand adventures. I would eventually go back and revisit the previous two games in the series, but in my opinion this was the pinnacle of its 2D form. With the move to 3D we wouldn’t really see anything like it again, at least not on the big screen.

That is until 2013, when Nintendo put on their phrygian caps and grabbed their nostalgia sword by the hilt and carved up A link Between Worlds. Although it was a fully 3D game, it wore it’s inspirations on its sleeve in both it’s design aesthetics and its gameplay mechanics. A true ode to A Link to the Past. The question is – was that something Zelda fans, nay, I wanted in a Zelda game? Or was it better for Nintendo to keep A Link to the Past… well… in the past? 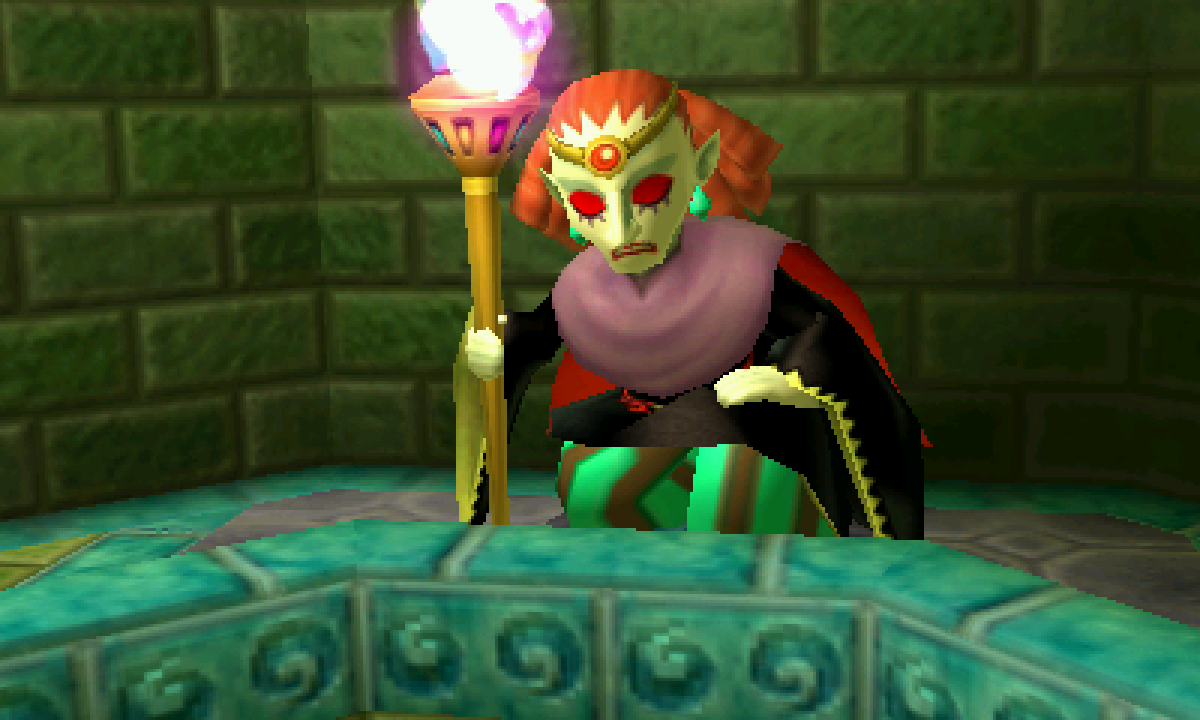 In A Link Between Worlds, you play as Link, a young man who seems to have a knack for getting himself involved in magnificent feats of endangerment and being in the wrong place at the wrong time. Soon after starting the game you’ll encounter the evil Sorcerer Yuga who aims to capture each of the Seven Sages of Hyrule in order to resurrect the infamous Ganon, claim the Triforce for himself and bring ruin to the kingdom.

To get the ball rolling Yuga kidnaps Princess Zelda and escapes through a tear in space and time that connects to the doppelganger realm of Lorule – get it?! In his stead, Yuga also casts a spell on the kingdom transforming each of its subjects into paintings with little hope to escape. Lucky for Link, he’s equipped with a fancy bracelet (retrieved from a shifty so-and-so named Rovio) that allows him to escape this spell and pursue the Princess-snatcher. Now he must seek out and save each of the Sages, find Princess Zelda and put an end to the neerdowell Yuga! 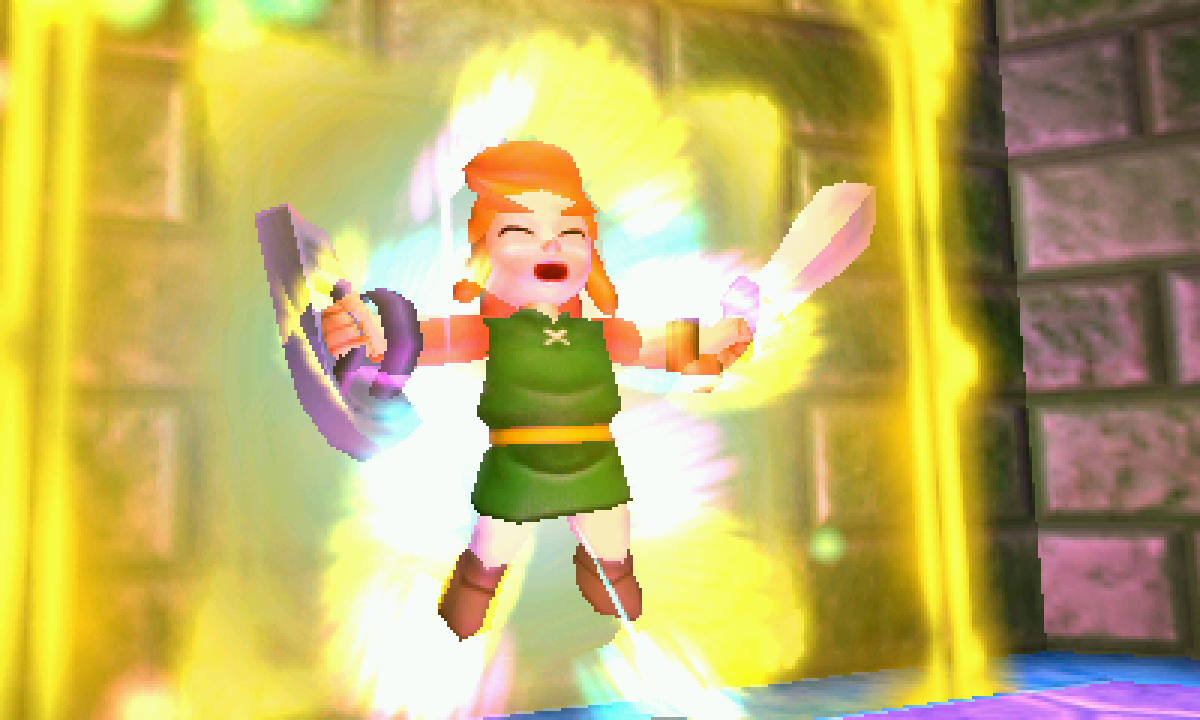 All in all a pretty standard fare with regards to a Zelda storyline, but what it really does is set the stage for all of the interesting characters you’ll encounter. It also gives you good reason to play with all of the elaborate new abilities and tools you’ll inevitably buy, plunder or stumble upon as you scour high and low this 16-bit inspired world. 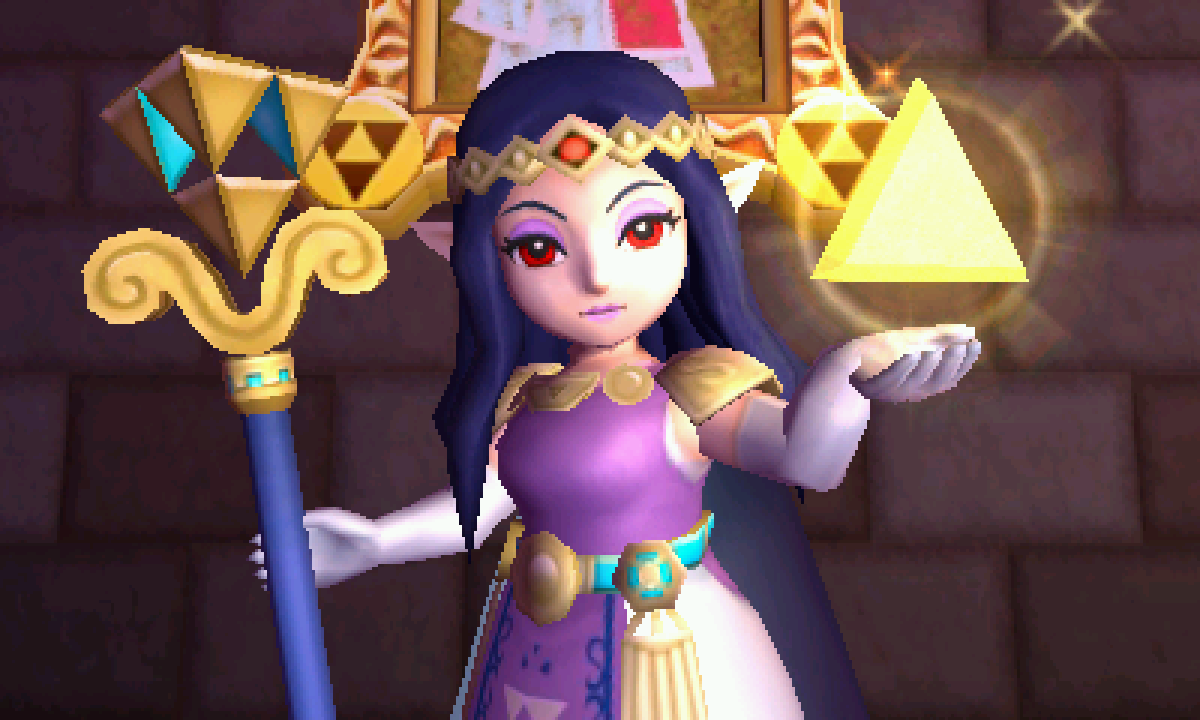 And that’s where A Link Between Worlds really shines. Like it’s predecessors A Link Between Worlds is filled with secret caves to unveil, side-quests to conquer and bottles to fill with unsuspecting fairies or other wildlife. Unlike its brethren though, especially its bellwether sibling A Link to the Past, this game throws a bit of a wrench in how you progress in the game.

Typically as you play a Zelda game you’ll encounter an area in the world that is inaccessible until you’ve retrieved the proper tool to overcome it. These are usually found in each of the world’s dungeons, which must be beat in a particular order. So, that means each of your playthroughs will be relatively the same and predictable. 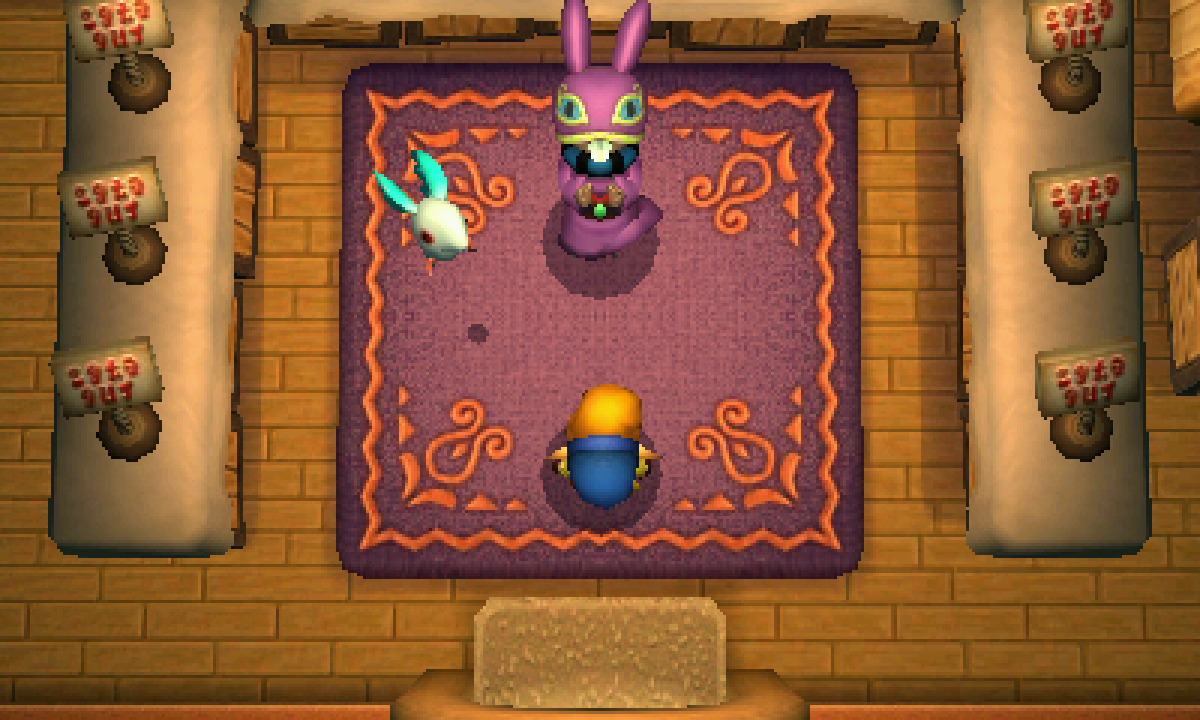 A Link Between Worlds, on the other hand, allows you to outright rent or buy many of these tools at any point in the game. This is done by utilizing the aforementioned Rovio’s shop. What this means is that many of the puzzles and obstacles you’ll encounter will be much less specific to a point in time in the game and can be overcome as early as the opening hours or as late as the final stretch. It also means that puzzles can be a little more open ended and clever, though never complicated. As such this Zelda caters to players young and old, hardened veterans and curious passerby alike. And as both a fan and a parent that’s always exciting.

There are still certain abilities that you’ll only get after progressing the story to specific points, but that makes sense since they probably wouldn’t want you waltzing up to the final boss right out the gate. This isn’t Breath of the Wild after all! 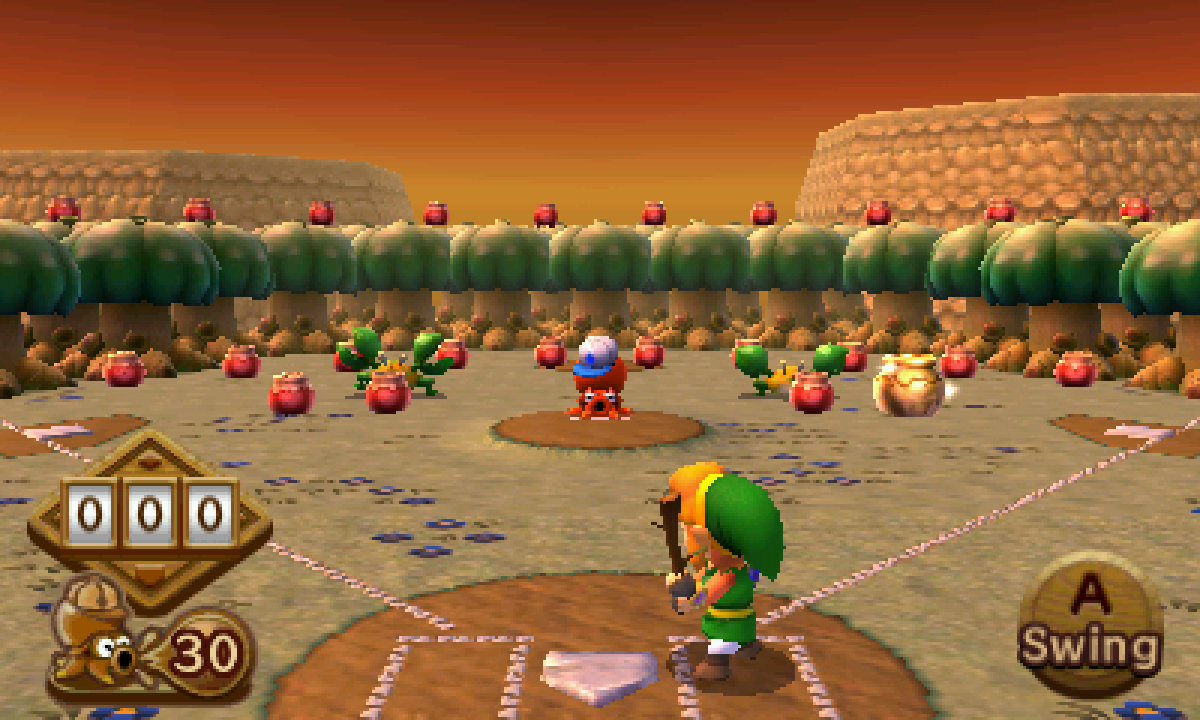 Outside of the new gameplay structure, A Link Between Worlds still maintains one of my favorite part of every Zelda – the dungeons. Still teeming with enemy filled rooms, tricky puzzles, treasure chests and ending with epic boss fights. I also very much appreciate seeing some of my favorite bosses from the SNES classic gracing my 3DS screen. I literally couldn’t help but smile when hearing the victory sound effects after defeating the likes of Arrghus or Moldorm.

If I had one gripe about how Nintendo decided to design this Zelda, it would be that the treasure chests you find have lost their luster. Because you either buy or rent many of the items you find in the game, that leaves very little to discover in a treasure chest. For the most part you’ll just find monster parts (used for potions) or rupees. Don’t get me wrong, you will need those rupees, but come on the end of the game you’ll have more than you know what to do with. And it just makes me lose my desire to find and open every one. This is where an achievement system would come in handy. Or at least some sort of award system to let you know you’re doing a good job *cough cough* 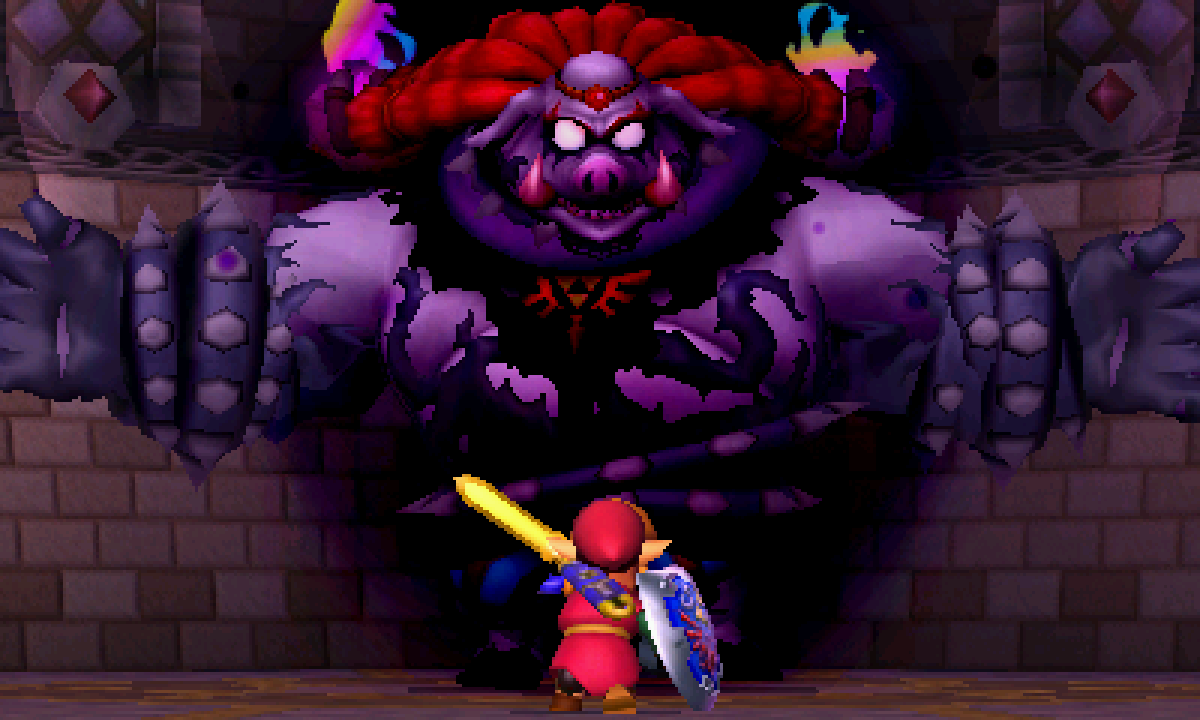 One thing I definitely can’t gripe about is Nintendo’s technical wizardry in mimicking the look and feel of A Link to the Past. If I couldn’t have my crispy pixelated sprites then what Nintendo was able muster up with their polygonal artistry was the next best thing.

All of the characters, enemies and environments are rendered beautifully in that eclectic style that the Zelda series is known for. The animations are also smooth and responsive leading to a frustration free feast for the eyes. I was worried that the small 3DS screen would take away from the visuals and prevent me from getting absorbed into the world, but it really didn’t. The visuals were just as striking as they would be on any console hooked up to your TV. 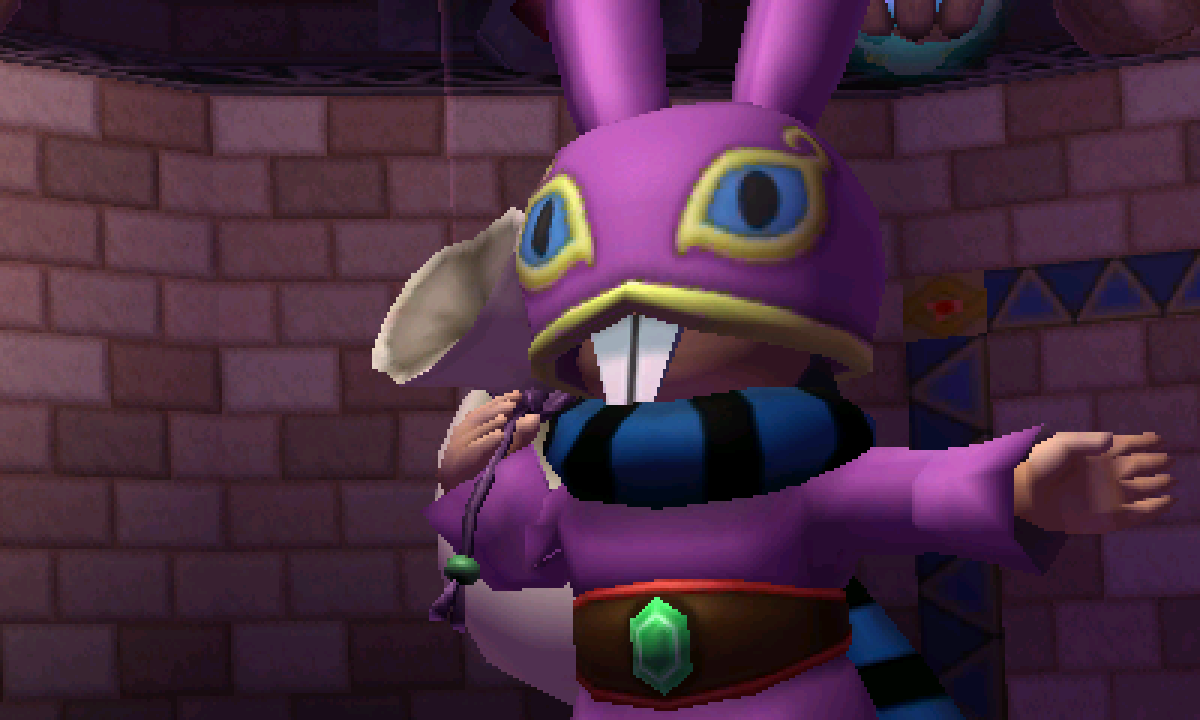 And I can’t talk about the aesthetics of a Zelda game without mentioning the music. And just like the visuals, Nintendo was able to take the melodies you’ve loved for years and elevated them to the next level. They aren’t mere remixes of the classics either. In this case they were reworked to have more body and depth. Adding more orchestral compositions and a variety of instruments to really flesh out those old school 16-bit chiptunes. A Link Between Worlds has a superb soundtrack that I could listen to day in and day out. Honestly, if I had a CD of this soundtrack and I still had a CD player, this disc would be hot glued in there never to be removed again! 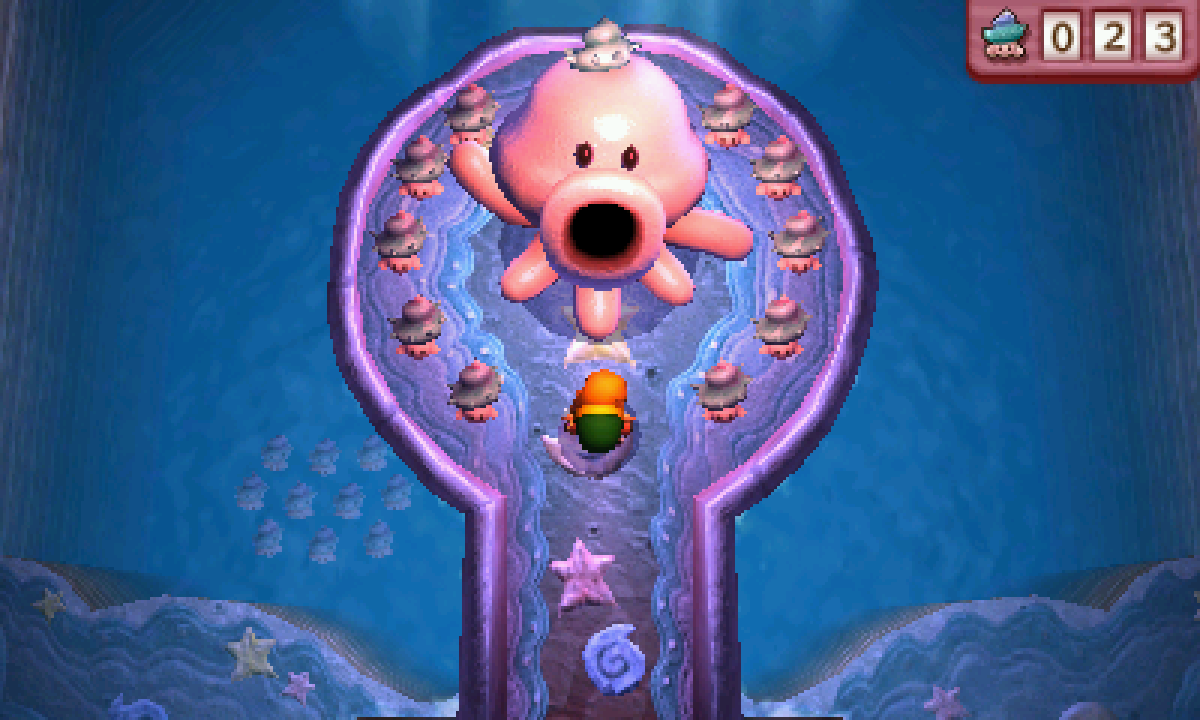 So, was Nintendo able to successfully carve out another classic Zelda game with their fancy and unwieldy nostalgia sword? Without blinking and eye, I can definitively say yes, they did. With the franchise heavily leaning towards the “new school” Zelda ways and with the likes of Breath of the Wild bringing a whole new meaning to how we play Zelda, it was kind of a breath of fresh air. It was nice to revisit the Zelda of my childhood and it was nice to see that it wasn’t just a mere remaster.

Nintendo definitely put their heart into this game and gave fans not only what they were looking for in a “classic” Zelda, but juiced it up just enough to make it fresh and exciting. If you’ve never played a Zelda before, this is definitely a good one to start with. It gives you everything a good Zelda has to offer without some of the trappings that may turn the uninitiated off. For those of us that are long time fans it’s a great blast from the past with a little twist! 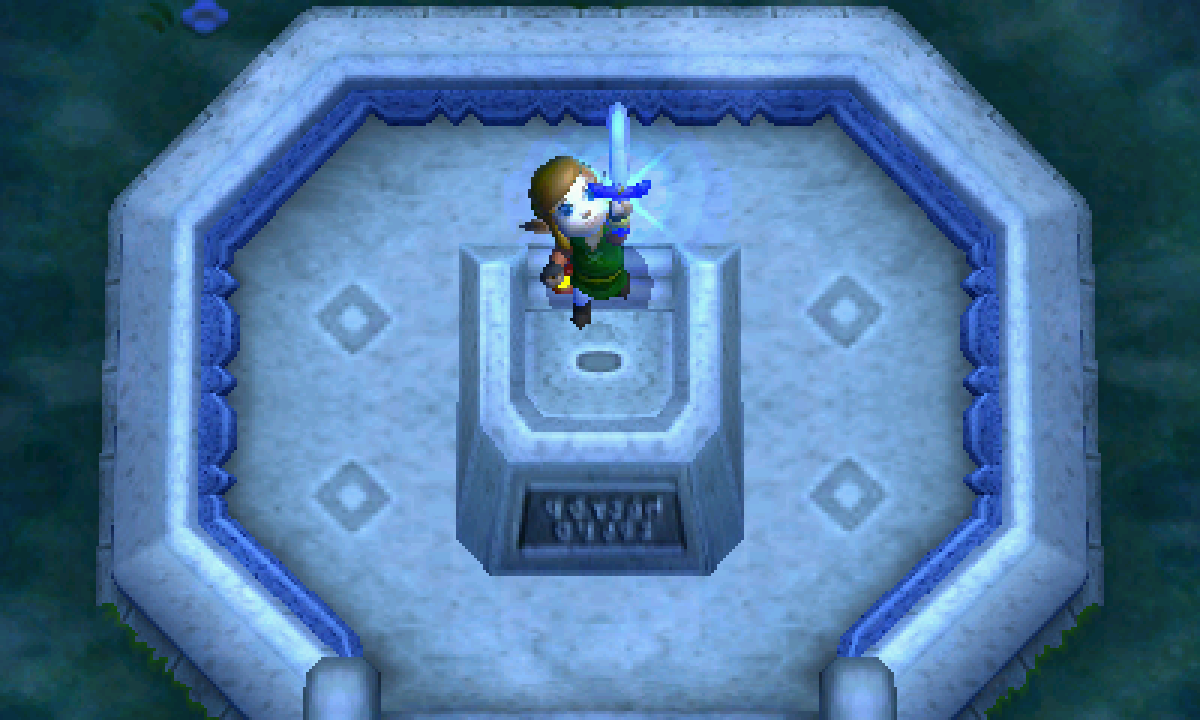 The Legend of Zelda: A Link Between Worlds is a game that any 3DS owner should have in their collection and I highly recommend you give it a try. And I have to confess I’m ashamed to admit that it took me this long to play the game! Especially now that the hype train for this masterpiece has come and gone. But alas, such is the life of a backlogger. The only thing I wish Nintendo would do now, is bring this handheld gem to the big screen a la the Switch!!

So what do you guys think of The Legend of Zelda: A Link Between Worlds? Have you played any of the other games in the franchise? If so, what’s your favorite one? Let me know way down there in the comments!

Screenshots created by The Backlog Odyssey

Doesn’t 2021 seem like the perfect year to get your fix of both horror and cyberpunk themed entertainment? I mean, the pivotal […]

I take a look at Coffee Crisis by Mega Cat Studios to see if rockin’ tunes, aliens and over caffeinated baristas are […]

If I’m going to be perfectly honest, I find it kind of funny when I hear complaints about developers re-releasing old games. […]

For centuries the Wood Elves and Moon Elves have had their differences, and sharing love between them could be considered taboo. That […]

The Legend of Zelda: A Link Between Worlds
Played On