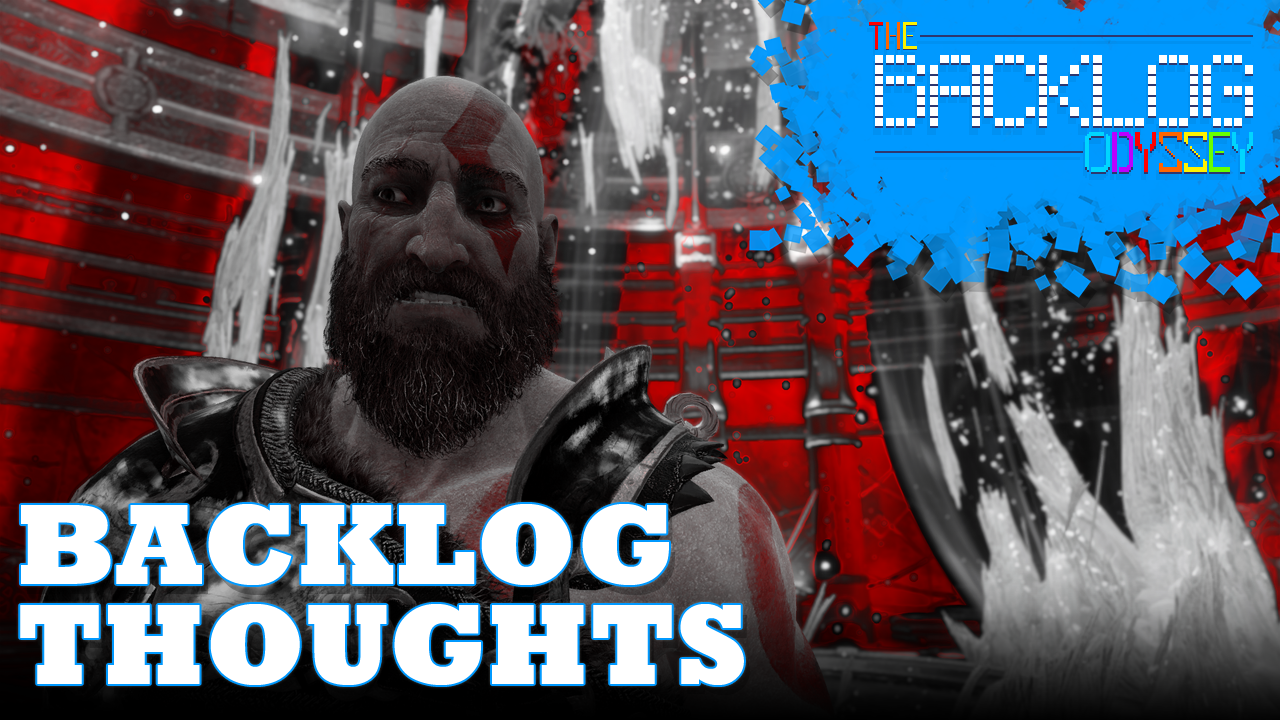 Kratos tries his hand at parenting and unfortunately the experience is all too relatable.

The Ole One Two Punch 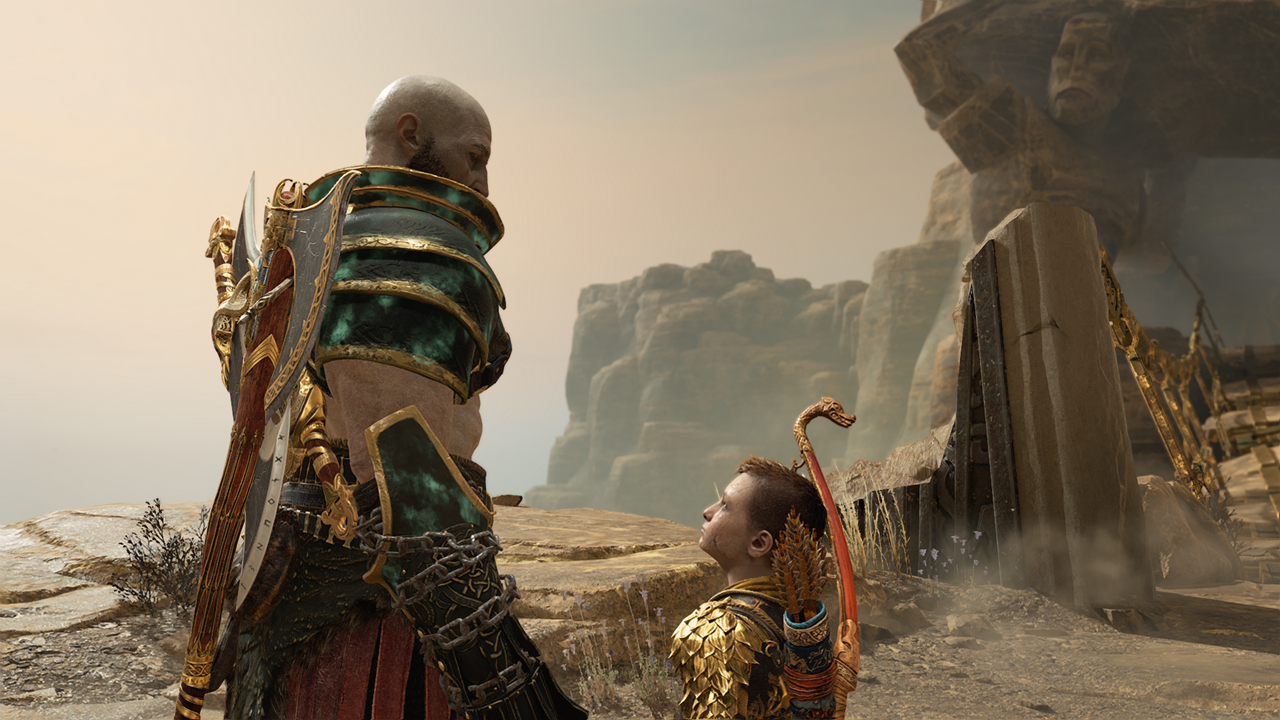 Have you ever been minding your own business playing a game, knocking out side quests, vanquishing the undead, inhaling tortilla chips like there’s no tomorrow…you know just having a good time… and BAM! You find yourself trapped in a glass case of emotion your happy go-lucky prior self simply was not prepared for. You’ve done the unthinkable! You’ve stumbled into the story mission and it just so happened to be one of those “punch you in the face with feelings” type of moments. Those low-down villainous bits of story that make you say “Wow.. I was just punched in the face with feelings…and I’m not at all angry about that”.

Now that could mean lots of things, like when a favorite character dies, you grieve for the other characters’ loss. Or when that dastardly villain strikes again and impedes your progress with another flipping boss fight! You fight to the bitter end and after all of that he STILL doesn’t die, sending you in a spiral of anger and frustration! 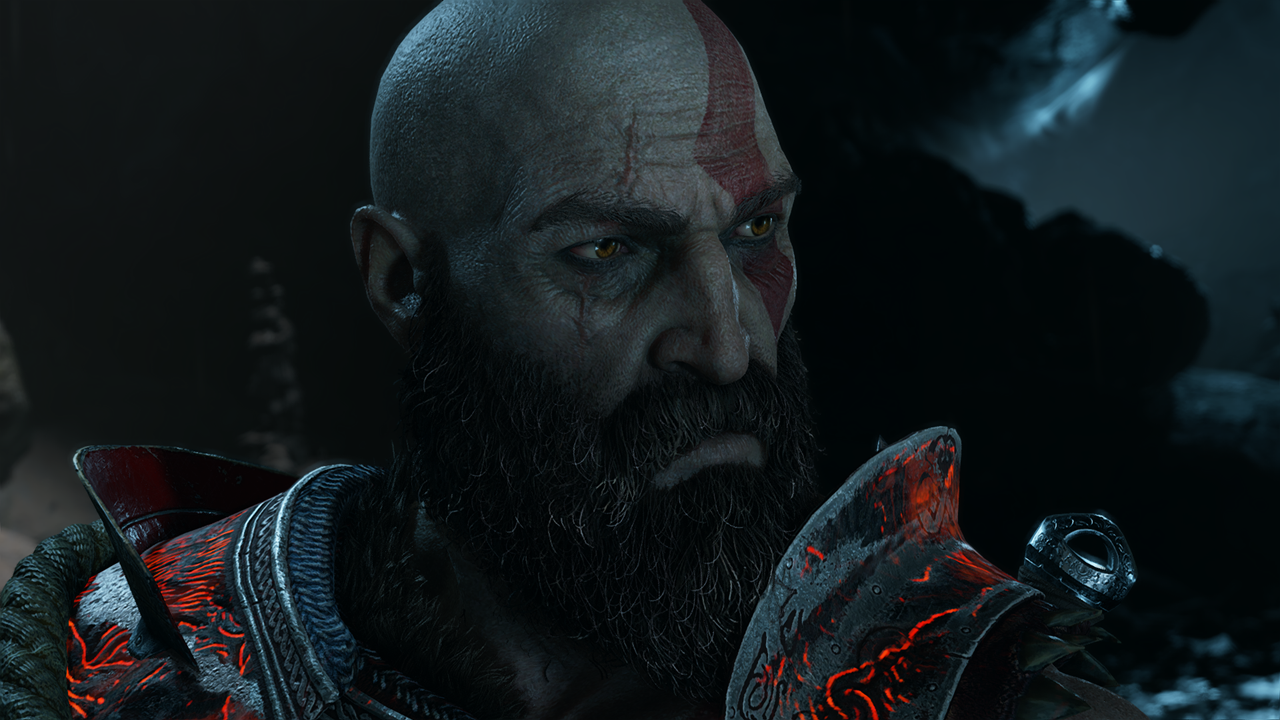 I’ve been gaming for a long time and really there are a great deal of such moments that have stuck in my head over the years. Many of them classic instances that gamers far and wide tend to identify with as moments packed with enough emotions to make you crumble like day old coffee cake. Like when Aerith dies in Final Fantasy VII or when you open that first door in the original Resident Evil (I think I had to remind myself to breathe!). Those are all great moments that I could easily fall back on and write a good solid piece about, but last night I hit a point in my current game that made me think, ”Well this is new…”. And really that’s where all good inspirations come from isn’t it?

There’s No Crying In Sparta! 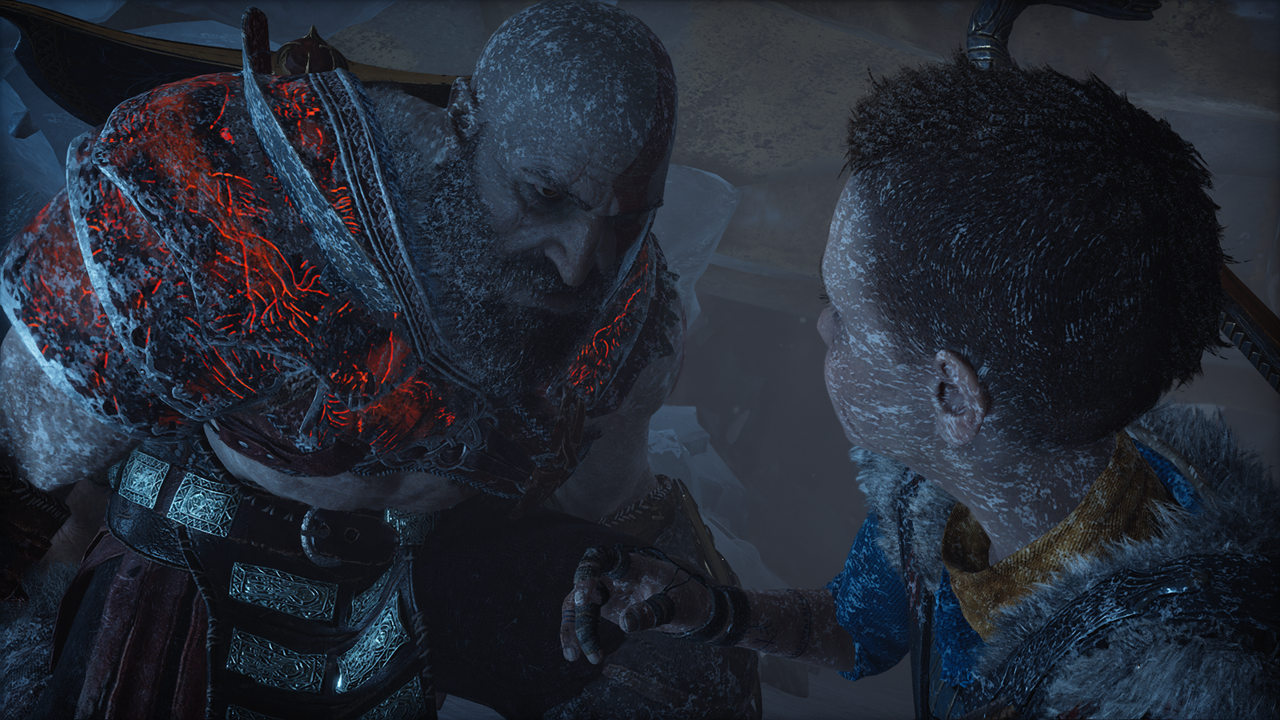 I’m going to guess that story-wise I’m about halfway through the latest God Of War on the PS4. There is definitely a lot of underlying emotion going on in the game thus far. I mean, first of all it’s God of War, a series that has become synonymous with flaming hot rage and intense action sequences, but this latest title in the series takes a much more somber approach. Heck, the opening first few minutes are of Kratos cutting down trees for his recently deceased wife’s funeral pyre. You feel for Kratos in his new situation, blindsided with the responsibility of becoming the sole caretaker of their son, Atreus. He’s a rough, tough, Spartan soldier after all right? He doesn’t have the patience to raise a young kid! And honestly, my knowledge of Kratos up until this game would have made me agree with all of that. 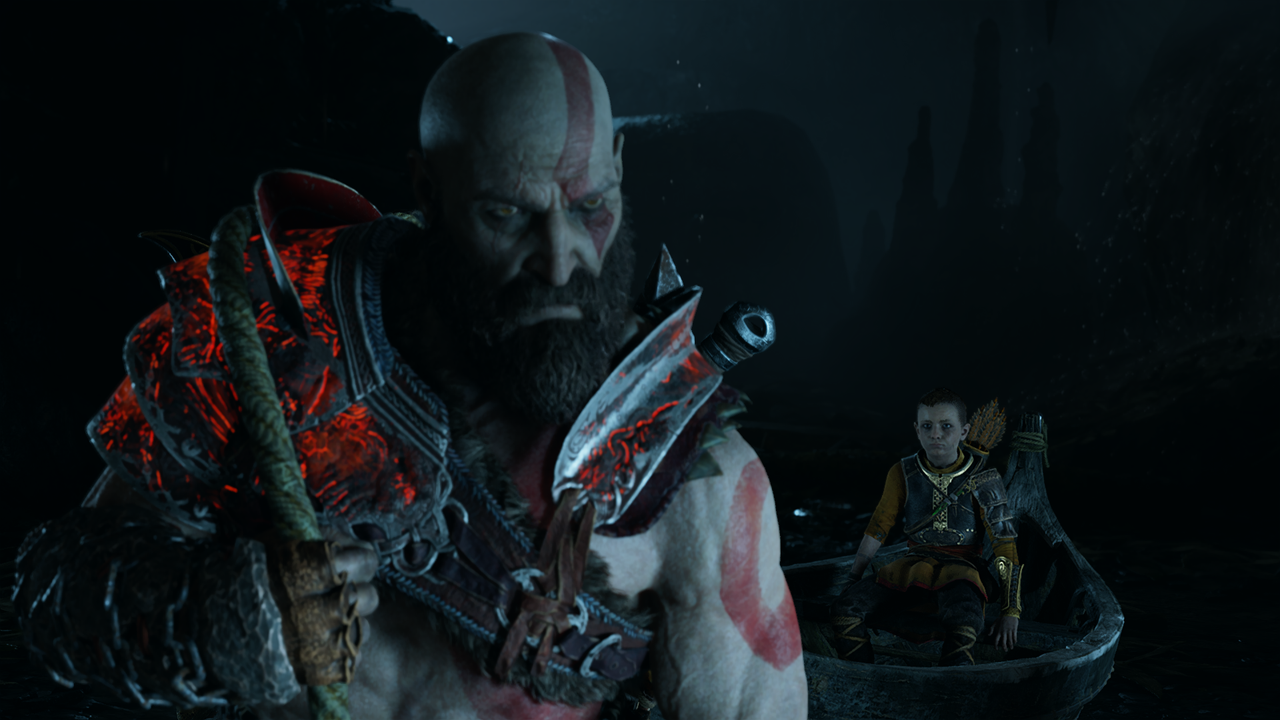 The first scene where Kratos is harshly telling Atreus to “Get in the boat, Boy!” I pointed at the screen and yelled “Don’t you do it Kratos! Look how little he is!!!!”. I was preparing myself for some cringeworthy moments of Kratos letting his impatient and uncaring flag fly. While I can’t say there aren’t any occasions where Kratos was too callous or hard on Atreus, it quickly becomes apparent that Kratos is just parenting the best way he knows how.

He’s feeling that horrible/wonderful hodge podge of emotions that every parent feels in regards to their child(ren). “I will gladly die for you I love you so much …but if you could stop putting yourself in mortal danger that would be great!!!”  And add on the stress of being the one who has to actually teach them how to survive in their daily lives, it’s tough. I feel for you Kratos. I do, man! Just take a deep breath and go aggressively fold some laundry or something. 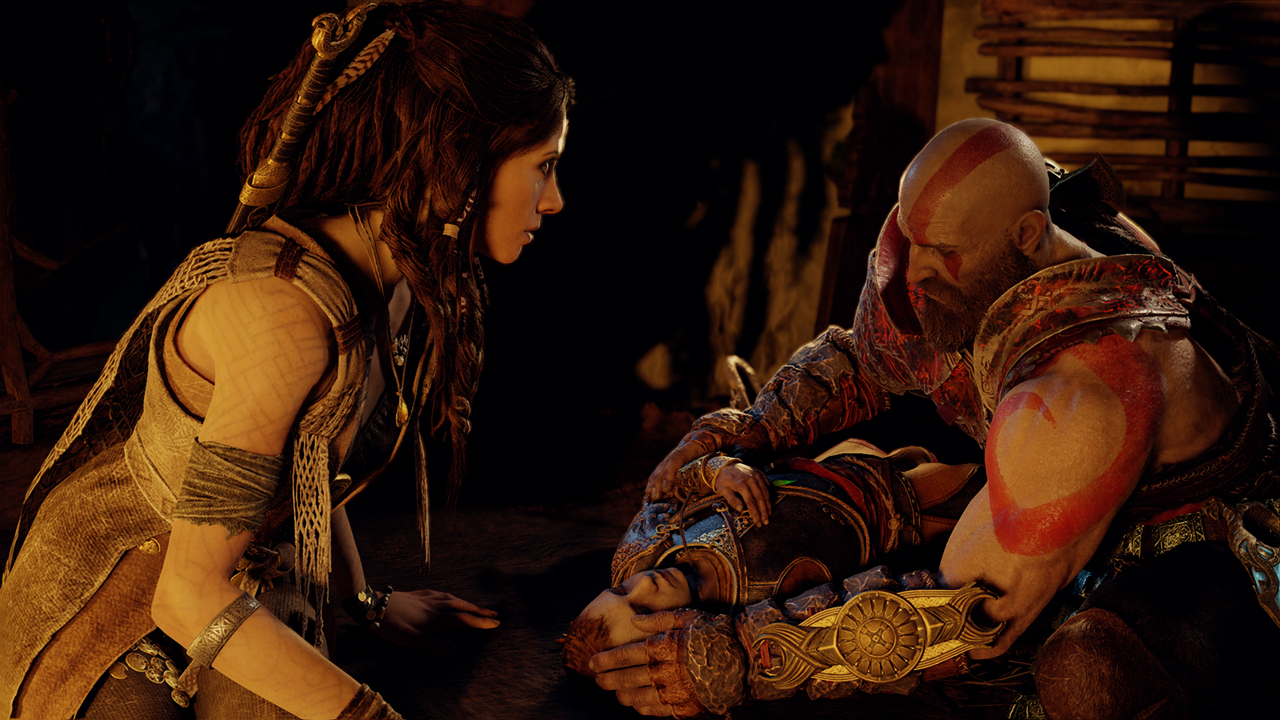 Then there was  “The Moment”. The one we’re all here for. Atreus falls ill. He collapses and his skin is ashen and he’s not moving or speaking. Kratos picks him up and knows that the formerly untrustworthy Witch of the Wood has the best chance of saving him. The journey to her house isn’t a long one and Kratos does a fairly good job of keeping his cool. That is until he reaches the last stretch and has to ride an elevator up to her door.

His panic becomes very real. He begins nervously pacing and breathing heavily the longer the elevator takes to reach the top. As a parent myself his panic is becoming my panic. “Was this damned elevator ride always this long?”. The elevator doesn’t even quite reach the top before Kratos is plowing through and banging on the door, bellowing that he needs help and “The boy is sick!!”. Thankfully the witch sets aside her beef with Kratos and offers to help. And that was about all the emotional distress my brain could bare for the evening so I saved the game and teetered off to go snuggle and watch Doom…you know a nice, calm, feel good movie. 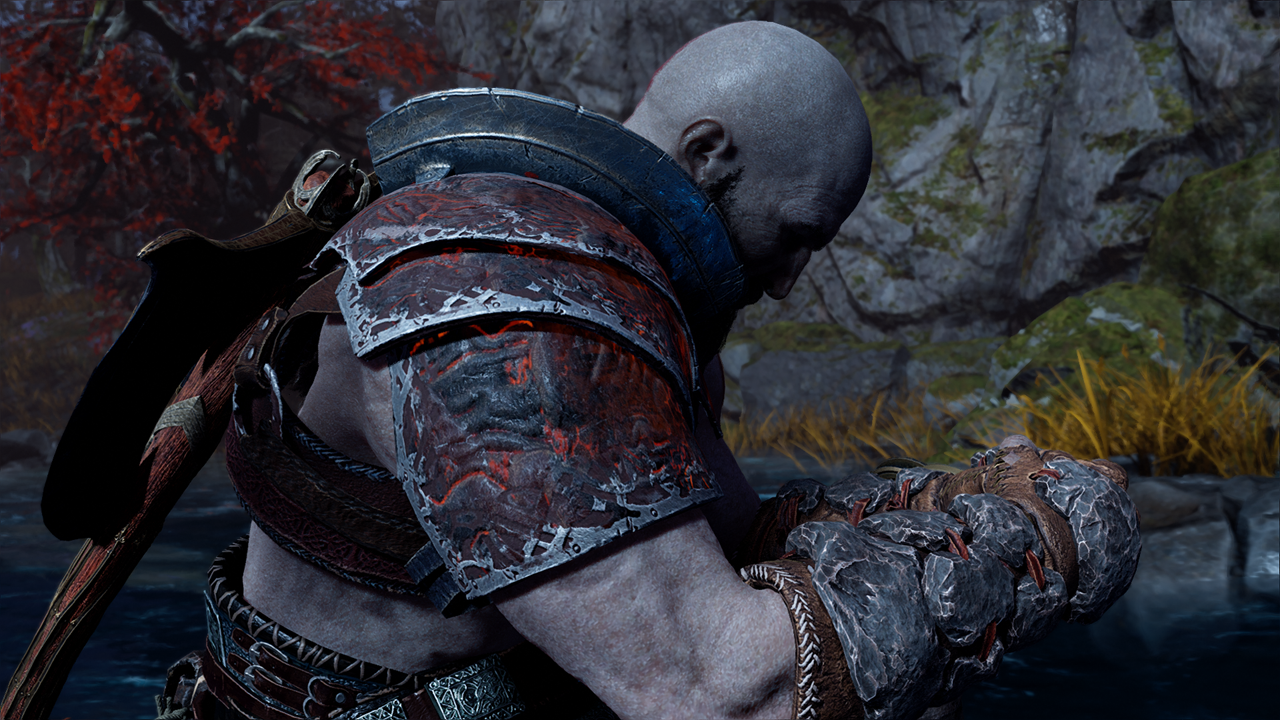 But it was that moment on the elevator. That moment where the stars aligned and through the magically perfect combination of great writing, acting, art design and relatable plot twists that I felt exactly what Kratos was feeling. It was definitely a new moment that will forever stick in my mind now. Not only as a deeply emotional experience, but one I didn’t expect to get from such a character. It’s scenes like that, ones that truly connect you to the characters you are playing, that take an already great game and lift it up to legendary!

What are your most memorable emotional gaming moments? Did they make you like the game more? Or dread having to go through it again?

Retro hard: a moniker given to a class of games that have you screaming in frustration at their deprecated design philosophies. You […]

As modern gamers, we’re always drawn to the biggest, best, new thing. It’s easy for us to see the latest and greatest […]

Layers of Fear throws paint at the canvas and calls it horror. But is it more than just a few jump scares? […]

Being a half-genie guardian can be tough! You gotta shake those hips to get things done, put up with boisterous pirates and […]