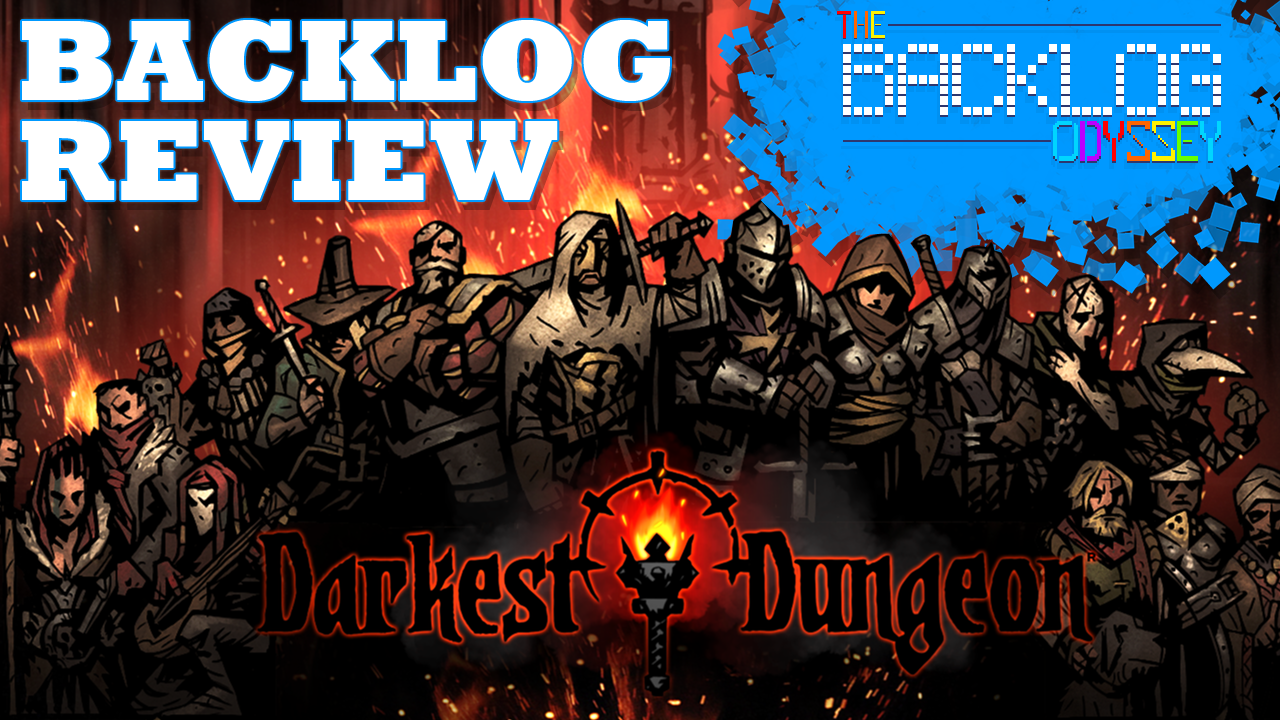 Darkest Dungeon is an addicting and well crafted game but do you have the gusto to brave it’s dark a morose challenges?! 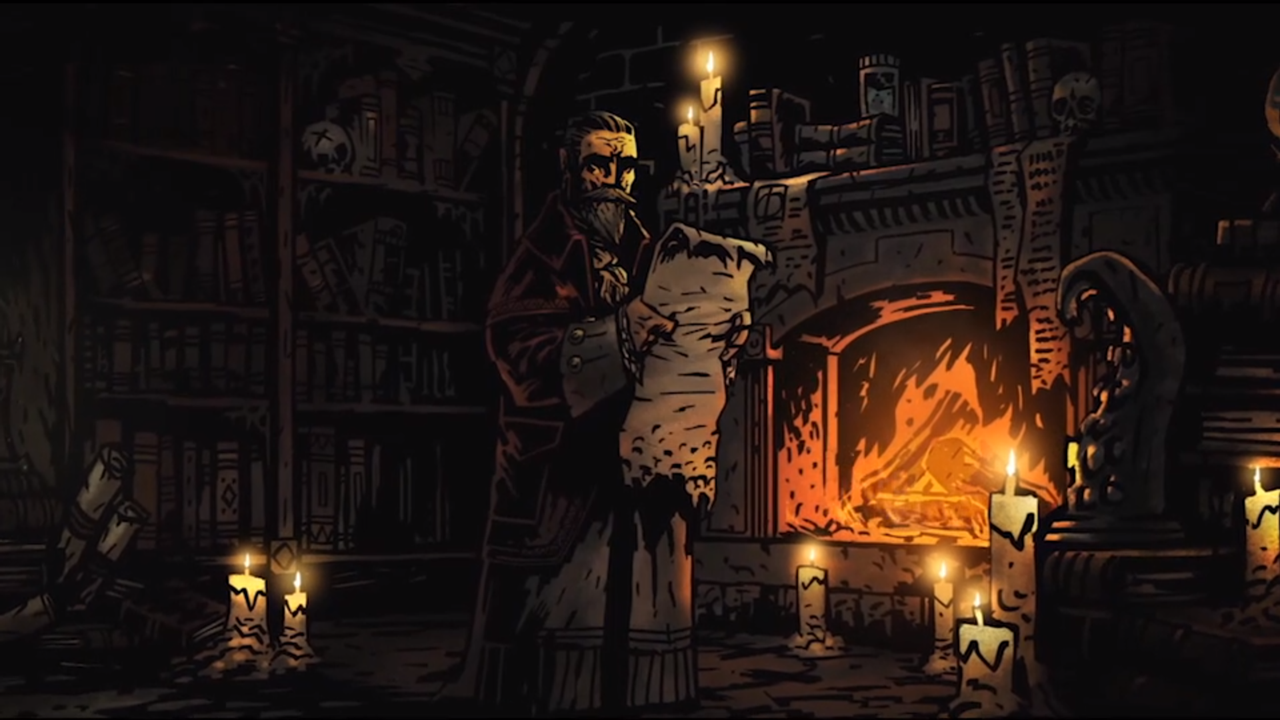 Like me, I’m sure many gamers out there find playing video games to be relaxing. It’s a great way to unwind after a long day at work or when you just want to zone out and forget about that pile of dishes you still have to wash. Many games will cater to this, sooth you into a lull and make you forget all your responsibilities with their whimsy. You have your Mario’s of the world for cheerful and colorful fun or maybe those blockbuster-ish games like Uncharted, for that rich and intriguing adventure. All giving you that warm and fuzzy feeling while you snuggle on the couch with an oversized and over buttered bucket of freshly popped popcorn. You know, a feel good experience that you can discuss over dinner. 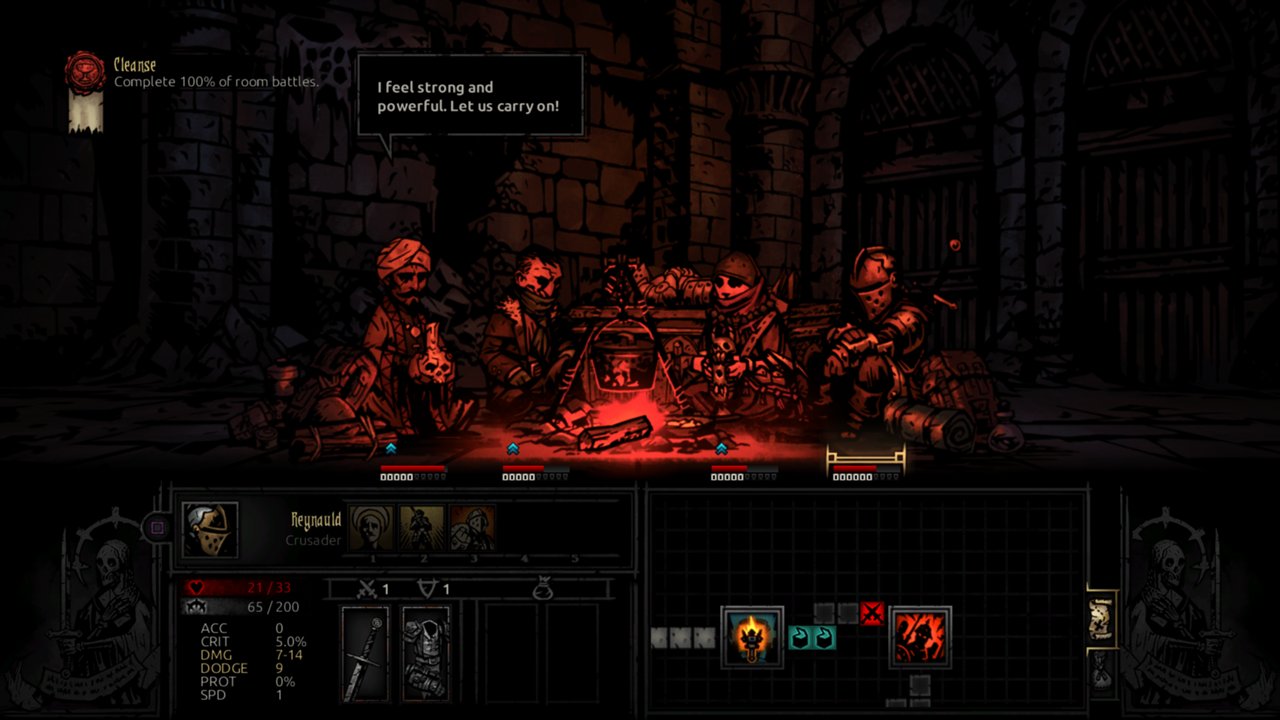 But then there are some games the throw “relaxation” and ““joy”” (that’s right, I double quoted that) right out the window! These games will make you second guess your ability to make good decisions and punish you for making the slightest mistake. Or maybe, just maybe, it’ll punish you for no other reason than “just because”.

That my friends, is exactly what Darkest Dungeon wants to do to you and it’ll do it while it stares you with its beady bloodshot eyes. It wants to summon the arcane demons of ages long past and forgotten, to fight you every inch of the way! And you won’t fight back, you’ll keep coming back for more and you’ll love it despite what your instincts tell you. 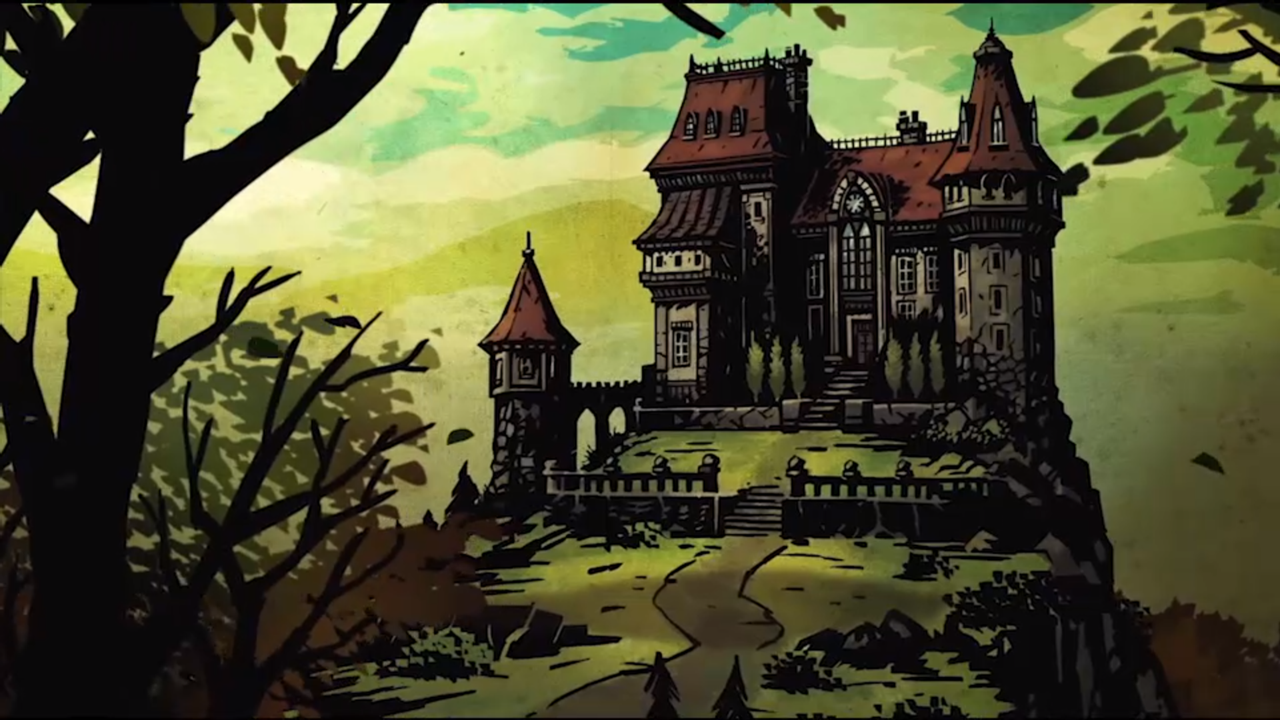 Darkest Dungeon, developed by Red Hook Studios, begins with you inheriting an “opulent and imperial” estate from one of your late ancestors. This grand and wonderful relative of yours thought it would be a stellar idea to tempt fate by playing around with ancient and eldritch magics in his spare time. Lucky for him, he was also able to find a portal deep within the catacombs beneath his manor that opened a door to a demonic and grotesque dimension. That just so happened to let loose death and despair. You know, sunshine, lollipops and flesh devouring monstrosities. 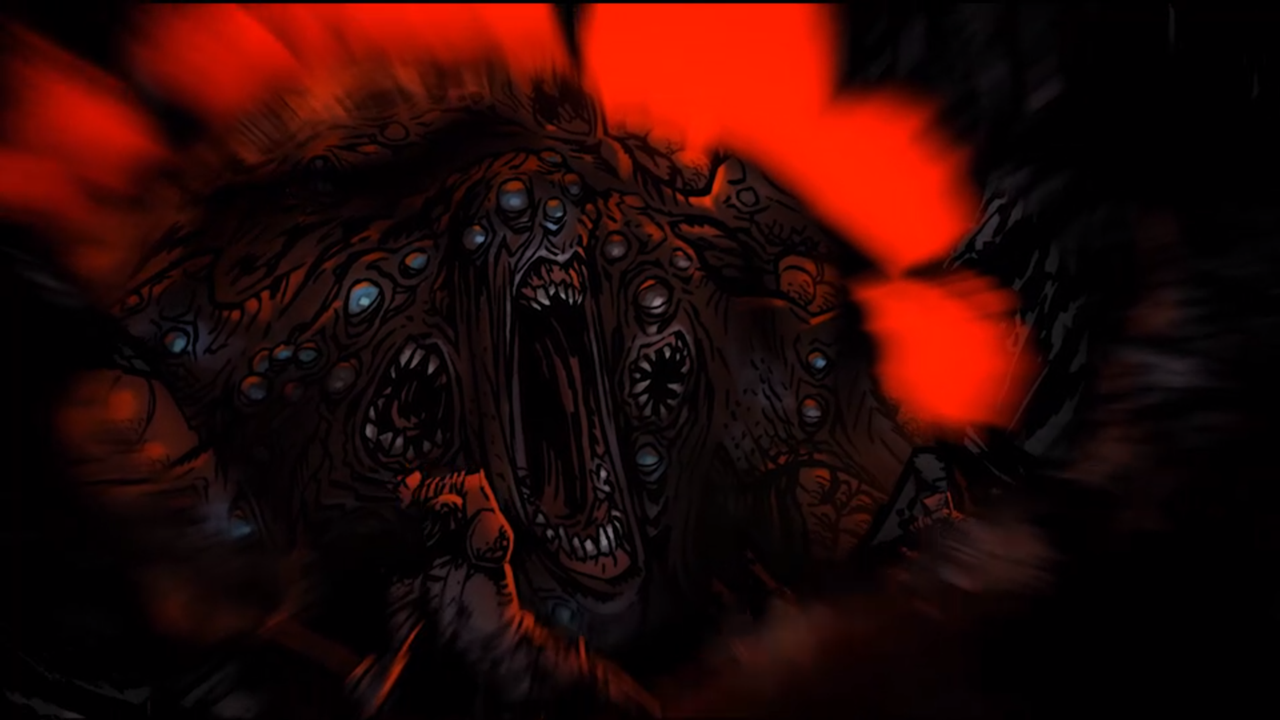 Double lucky for you, this little house of horrors is now your responsibility and you need to do something about it! So you recruit “willing” treasure hunters, mercenaries and other friendly ne’er do wells to explore the mind bending labyrinth of the darkest of dungeons and its surrounding grounds. Their goal? To bring back treasures and trinkets, spiral into insanity and of course get paid for an honest days work. Oh and save the day… I guess.

An eternity of futile struggle 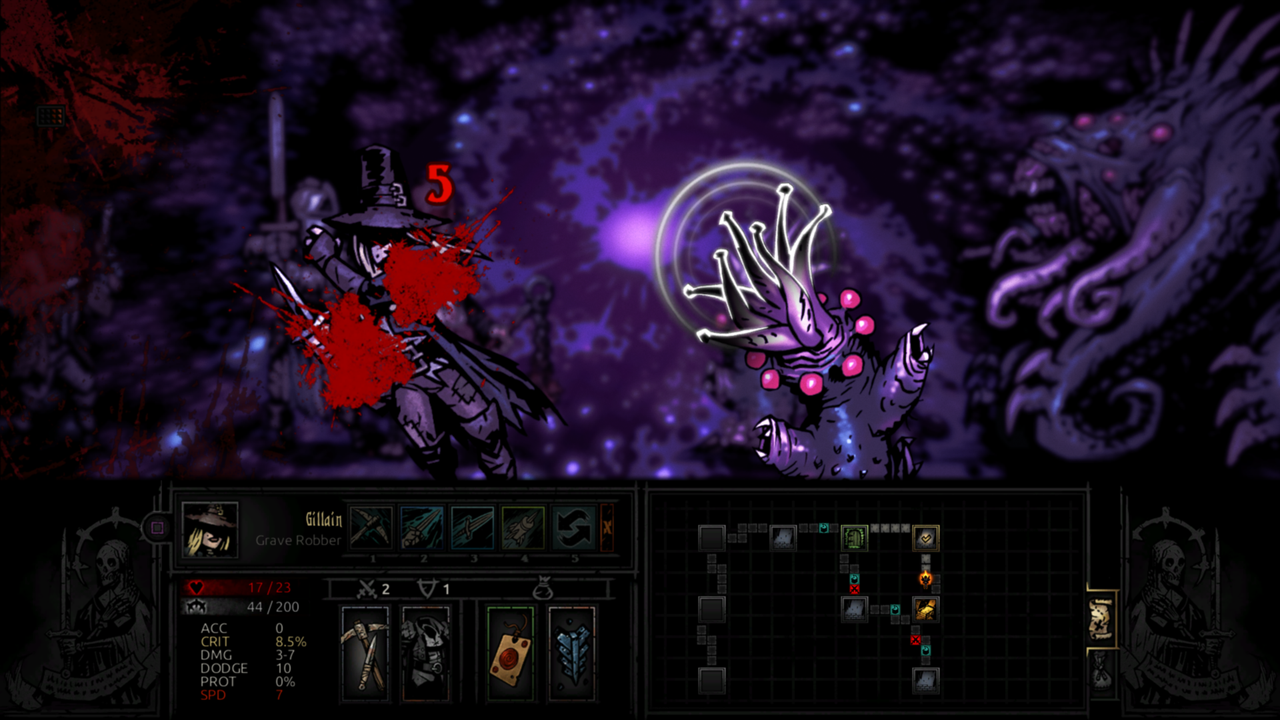 That pretty much sums up the gameplay of Darkest Dungeon as well! You’ll find yourself recruiting a variety of characters with their own unique hero classes and abilities, to explore the various “dungeons” in the game. From the righteous Crusader who focuses on swift and powerful melee attacks (with a hint of holy magic) to the cursed and abhorrent Abomination who can transform into a beast that feasts upon the undead legions you’ll undoubtedly encounter. And as a turn-based dungeon crawling RPG, you’ll also be able to upgrade their equipment, find accessories to apply buffs (and debuffs) to your stats and learn new skills/abilities. 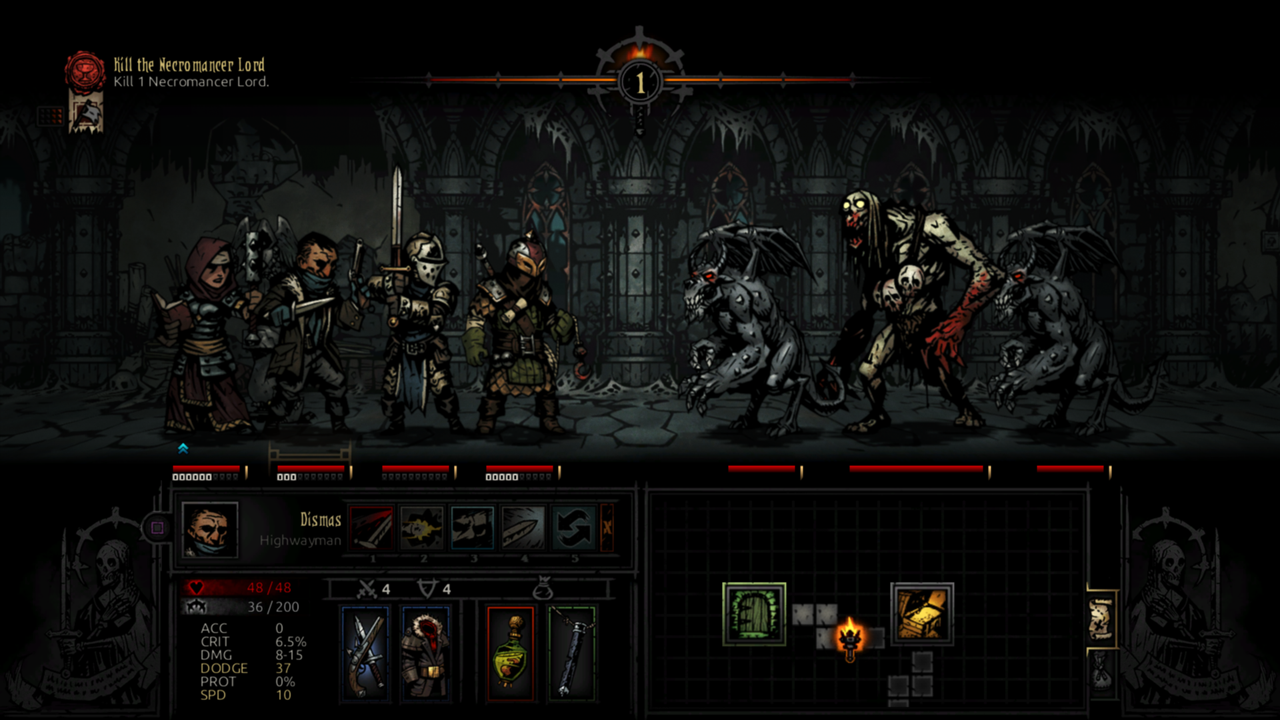 With it’s 15 classes (17 with the DLC) there is an addicting layer of strategy in the gameplay. It forces you to think about what classes work best together and which can handle the current situation you’re about to thrust them into. On top of it all, these characters can suffer from afflictions, mental breakdowns and diseases that can affect their performance during a mission. These status effects can all be remedied when returning to the town, but if you don’t think twice before you send a weak, insane or otherwise low level character into the latest and greatest death gauntlet, you can lose them forever! 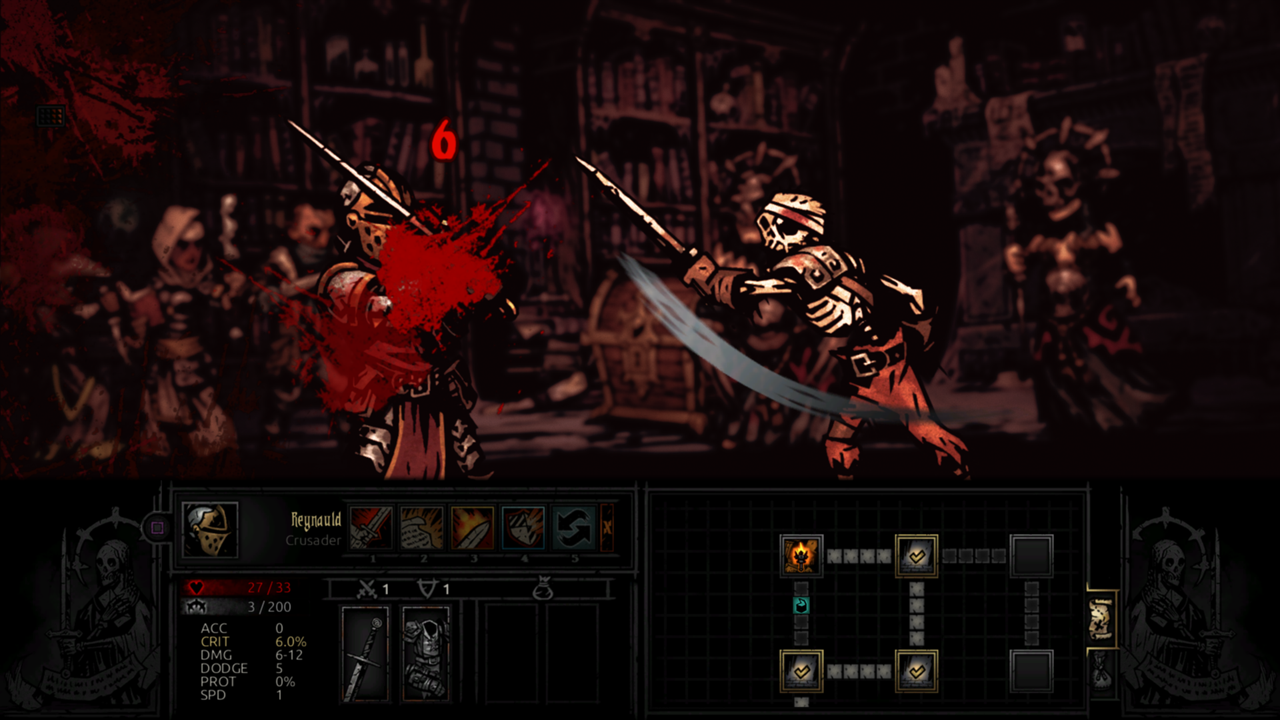 That my dear readers is where the stress of playing the game passively leaks from your screen and absorbs into your soul through osmosis. And I can sum it up in one short and concise sentence. This game is hard. Like calculus hard!

Keeping these characters alive is thrilling and a task in futility. You need to come to terms that you will lose some of your characters and the fact that permadeath is a prominent feature, it makes all of your decisions that much more important. Therein lies one of my gripes with Darkest Dungeon though. Because it is an RPG with a hefty dose of chance, many of your deaths feel unfair. And losing a character that you’ve spend most of the game leveling up is devastating. You can of course mitigate this somewhat by always having a healer on your team or leaning hard into characters that use support magic, but that’s not always effective and you can’t always guarantee that they won’t be the first to die. I swear enemies are drawn to them like magnets! 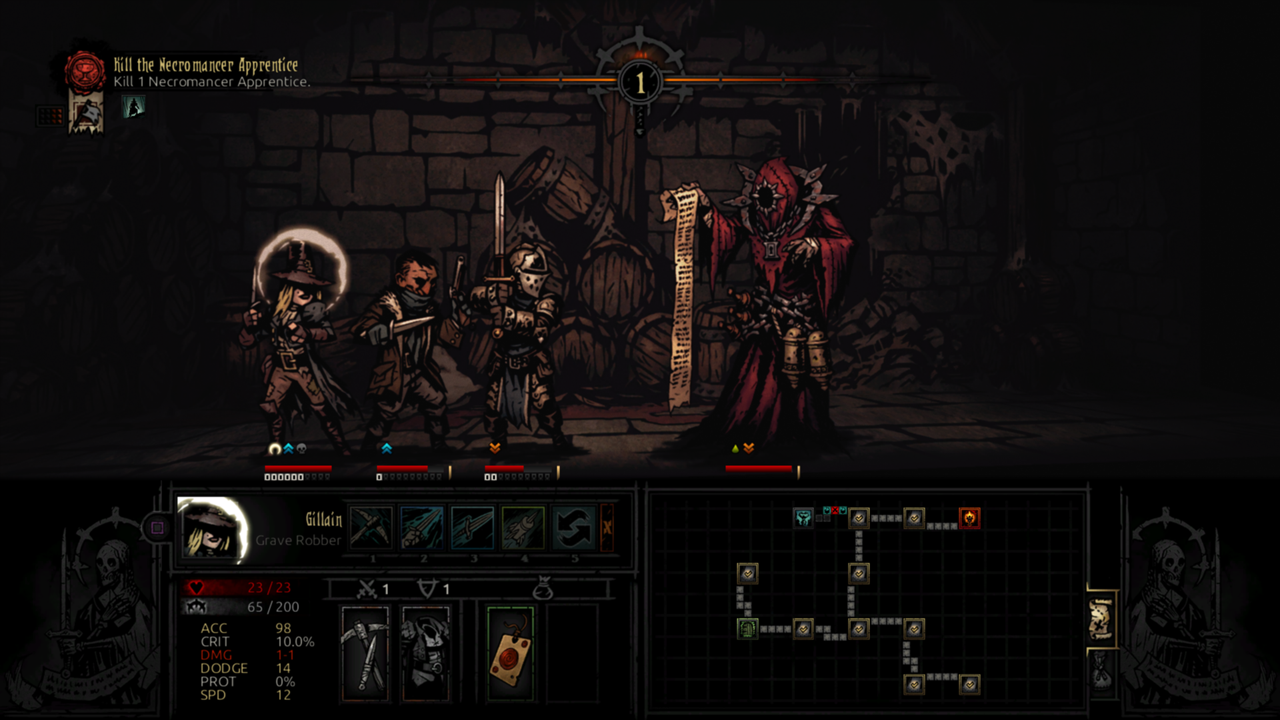 One of my favorite things about Darkest Dungeon is its atmosphere. The game channels that Lovecraftian vibe superbly with intense and somber writing that earnestly portrays the narrator’s paranoia and overall loss of sanity. The prodigious bassey sound effects when you land a hit on an enemy or just the booming low frequency undertones within the background music lends everything a very impactful and purposeful feel. It’s all very engrossing and very impressive.

The graphics as well are detailed and dark. You can see the despair in the characters faces and the monsters are all threateningly outlandish. Every inch of each new area replicates what you would imagine H.P. Lovecraft would conjure up in one of his short stories. So, basically nightmare fuel that will traumatize you until the end of days. And although everything in the game seems like it was once extravagant, it now feels decrepit and sinister. I’ll tell you one thing I wouldn’t touch half the things in those dungeons with a ten foot pole while wearing a hazmat suit. 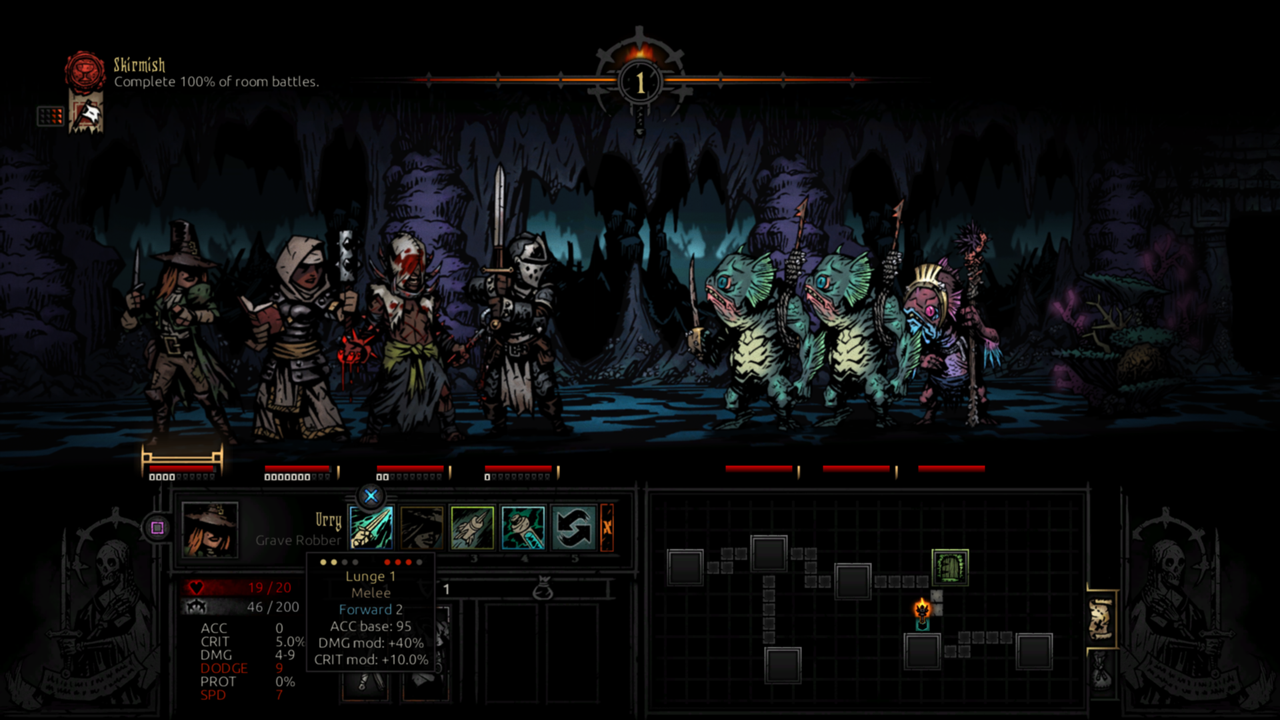 The only thing I could really complain about would be character animations. It did feel a bit like you were controlling a bunch of marionettes on a shish kabob. It may not have taken away from the gameplay, but it did take a bit away from the immersion of the game. Not a huge problem mind you, but more fluid and hand drawn animations would have really tied it all together. 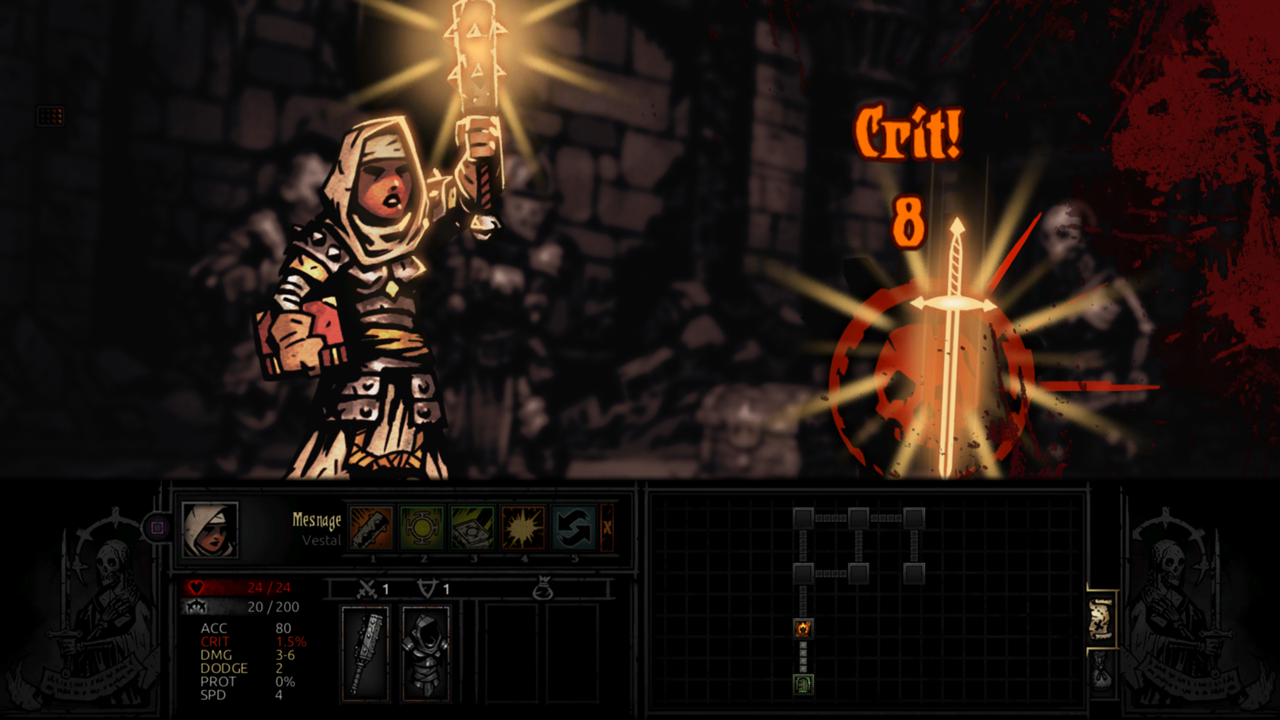 Darkest Dungeon is a dark, stressful and intense game that may not be for everyone, but sometimes the hardest challenges reap the greatest rewards. I really enjoyed my time with the game and it actually prompted me to dive into the fascinating H.P. Lovecraft stories it drew its inspiration from.

That begs the question though, should you go out and try it? Well, Darkest Dungeon is certainly not for the faint-of-heart, but if your looking for a good challenge and long to explore damp dark dungeons, then absolutely yes!! You’ll be rewarded for your blood, sweat and tears. On the other hand, if your not a fan of losing your prized character and possible a controller or two then (shameless plug inbound) maybe just share this review instead. *Wink wink nudge nudge*

What are your thoughts on Darkest Dungeon? What is a game that drives you insane? Let me know in the comments below!

Is The Witness more than just circles and lines, who knows, but those trees are dang pretty! Brain Mush Cardio It’s a […]

What do you need to know about Gentlebros newest release Cat Quest II? Not much, just that it’s an open world, action […]

When cuteness meets rhythm in Giraffe and Annika will it hit all the high notes or end up a chaotic cacophony? Let’s […]

I’m what one might call a console gamer. It’s what I grew up with and where I feel the most comfortable in […]