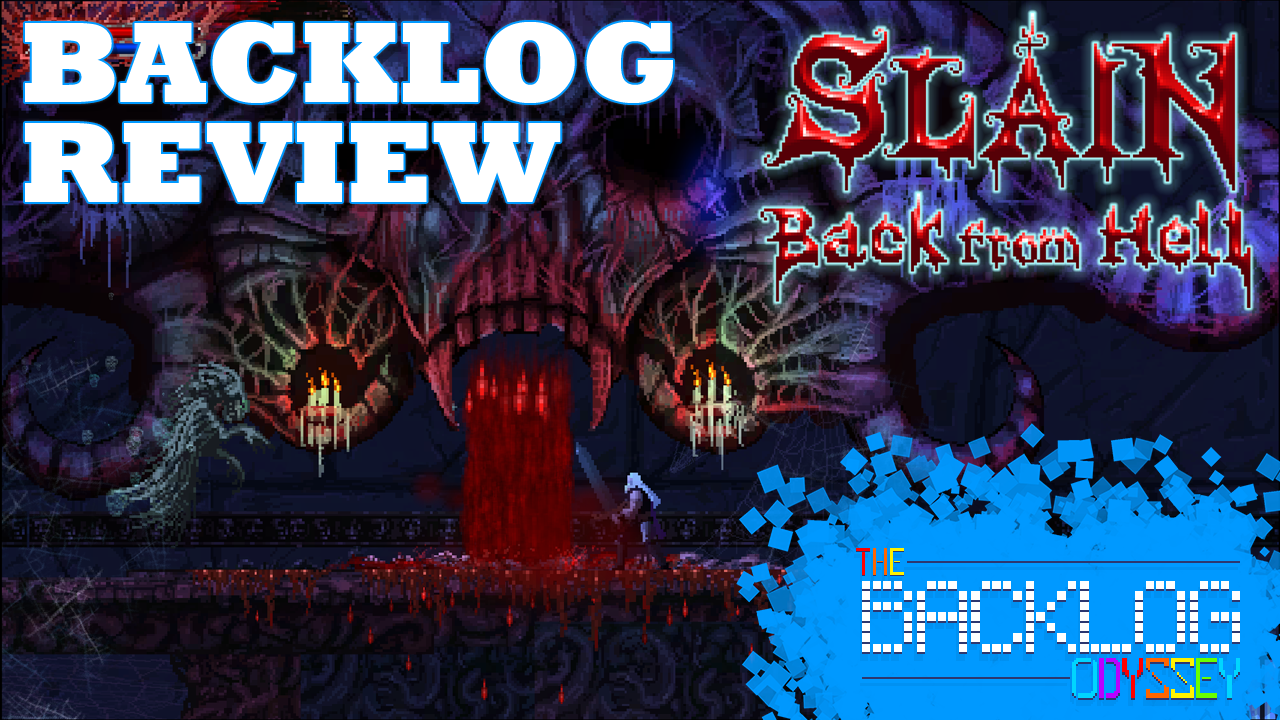 Slain: Back from Hell wraps 2D action in more pixelated gore and head banging metal than you can shake a stick at.

The Most Metal Thing I’ve Ever Seen 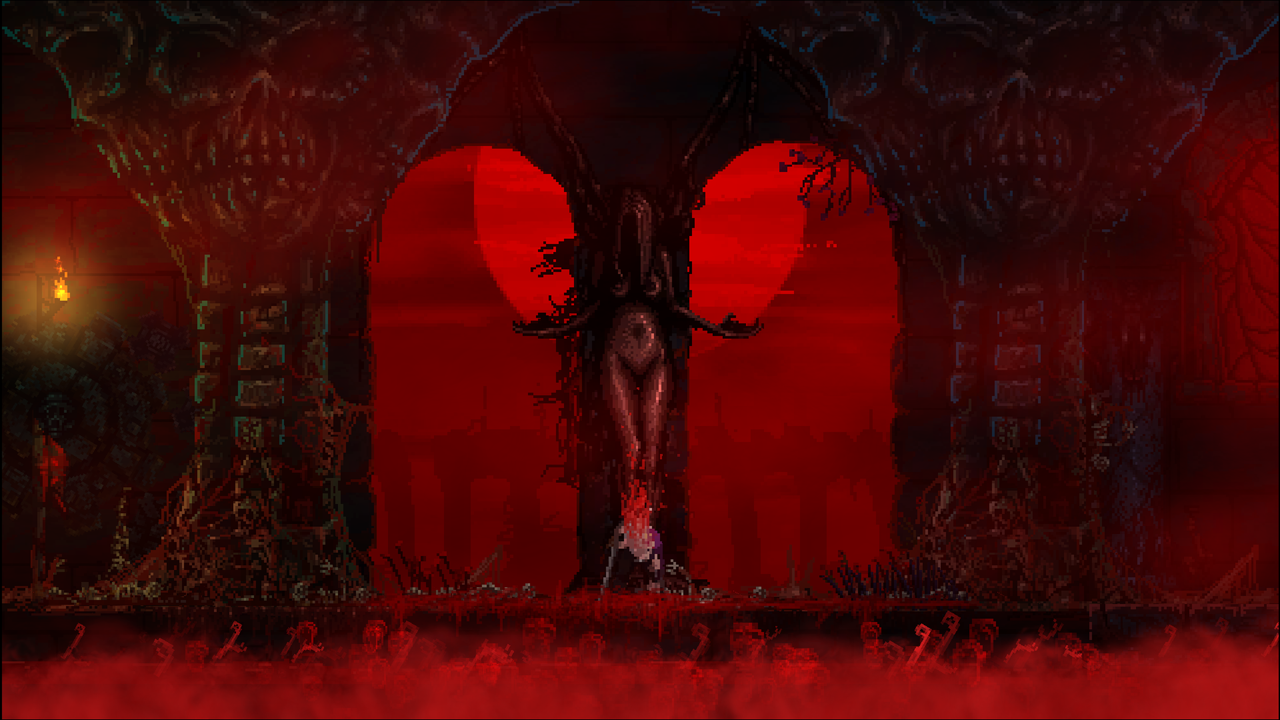 In my mind nothing goes quite as well together as heavy metal and Gothic fantasy. It’s like the peanut butter and jelly sandwich of genre mashups. There’s just something about the combination of fire breathing dragons, reanimated skeletons and gorey deathtraps mixed with face melting riffs that puts a smile on my bearded chinny chin chin.

And if this is what you’re looking for then you’ve come to the right place because Slain: Back from Hell is all of that and more! Slain is so metal and so gothic fantasy that your black lipstick and eyeliner will burst into flames! You’ll also find yourself shredding sick licks on the back of some beastly axe wielding man named Hogre while you’re grandmother cries in the corner wondering what happened to her once innocent grandchild. I don’t know guys and gals… I tried.

Rise from your Grave 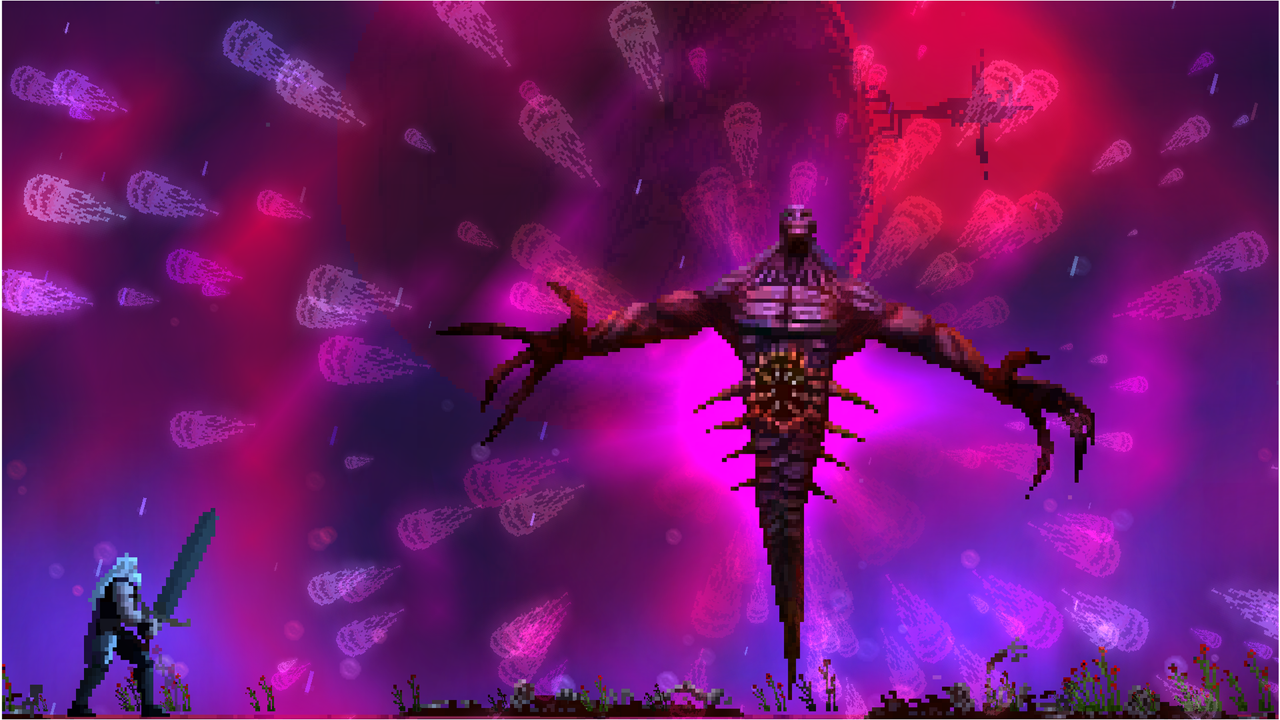 In Slain you’ll take control of the sword wielding and luxuriously long white haired Bathoryn, who has recently been risen from a deep slumber by an eerily blue and ethereal spirit. I can’t imagine he’s too disappointed considering his humble abode is a crypt and his place of rest is an intricately sculpted sarcophagus. I have no idea who or what this guy really is. He’s either a vampire or so damned metal that only a decrepit sarcophagus will do after a hard night of slappin’ the bass and melting faces. But who am I to judge?

You’re task? To abide by the wishes of “ye ole spirit with far too many arms” and hunt down the cruel and maniacal Vroll. An evil overlord who has corrupted this already hellish world and released upon it a legion of brutal and malignant creatures. Bathoryn, as one would expect, doesn’t seem too stoked about the whole ordeal, but regardless he tightens his leather chaps and scours the six Gothic realms slaying each of Vroll’s high ranking lackeys. 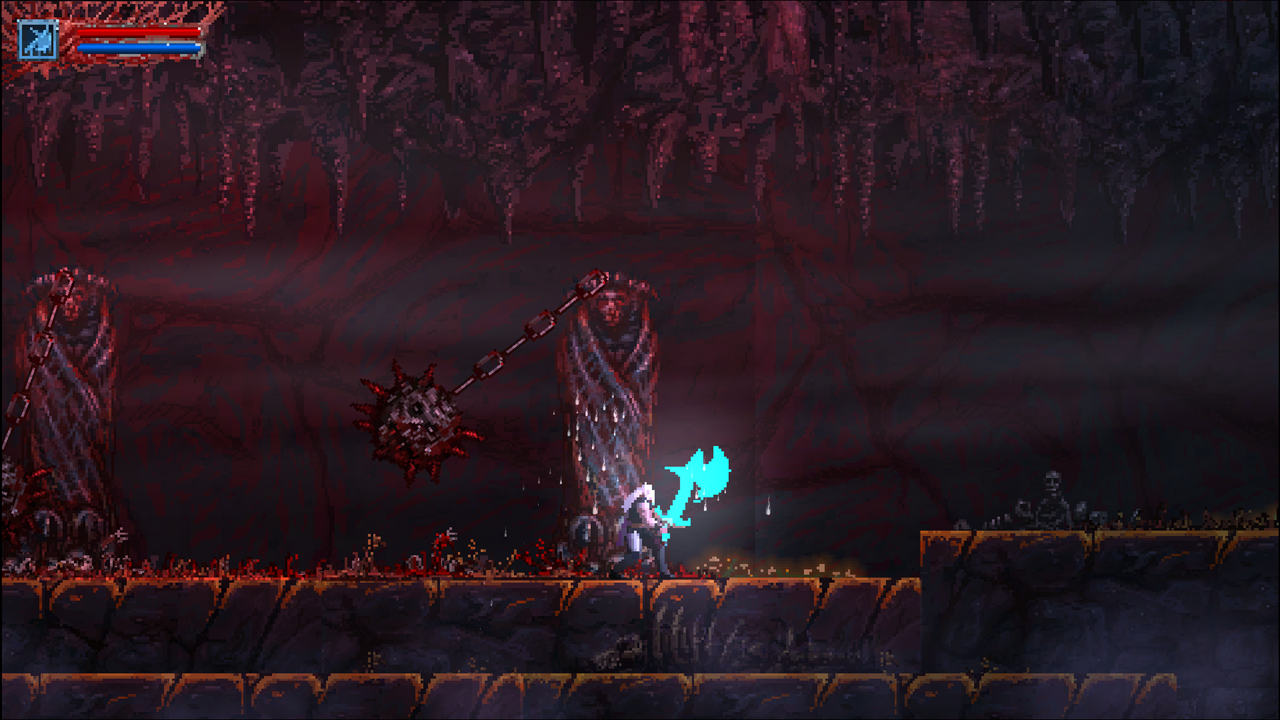 Not too much is going to stop him either. Whether he’s facing pools of gurgling viscera or bloodthirsty wolves five times too big, Bathoryn is determined to give his buddy Vroll a fancy new sword hole in his chest. 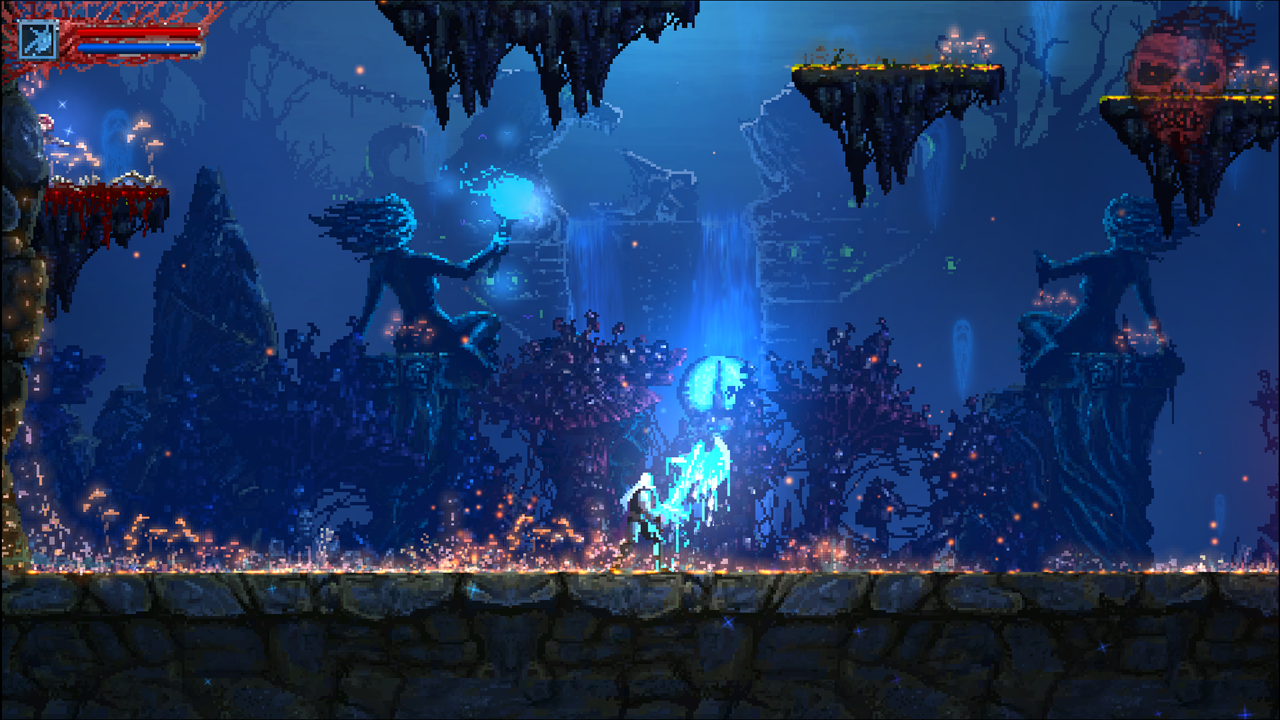 Although Slain isn’t exactly mechanically deep or overly complicated, what it does offer gameplay-wise is fun and satisfying. At times I did find the controls to feel a bit loose and floaty, but its challenge never felt unfair. And the game gives you pretty much everything you would want in a 2D retro inspired action platformer. That is, platforms to dodge and weave between, death pits to avoid and enemies to pummel. With enough practice the game is easy enough to master and in a few short hours you’ll be splitting skulls left and right on your road to the final boss.

There’s definitely a visceral feel to the attacks as well, which makes defeating the seemingly endless slew of enemies quite satisfying. My only complaint would be that there isn’t much variety in the types of enemies you’ll face. Short of the end stage bosses, you’ll be fighting hundreds of skeletons with slightly different colored rib cages and the odd floating ball of flesh. 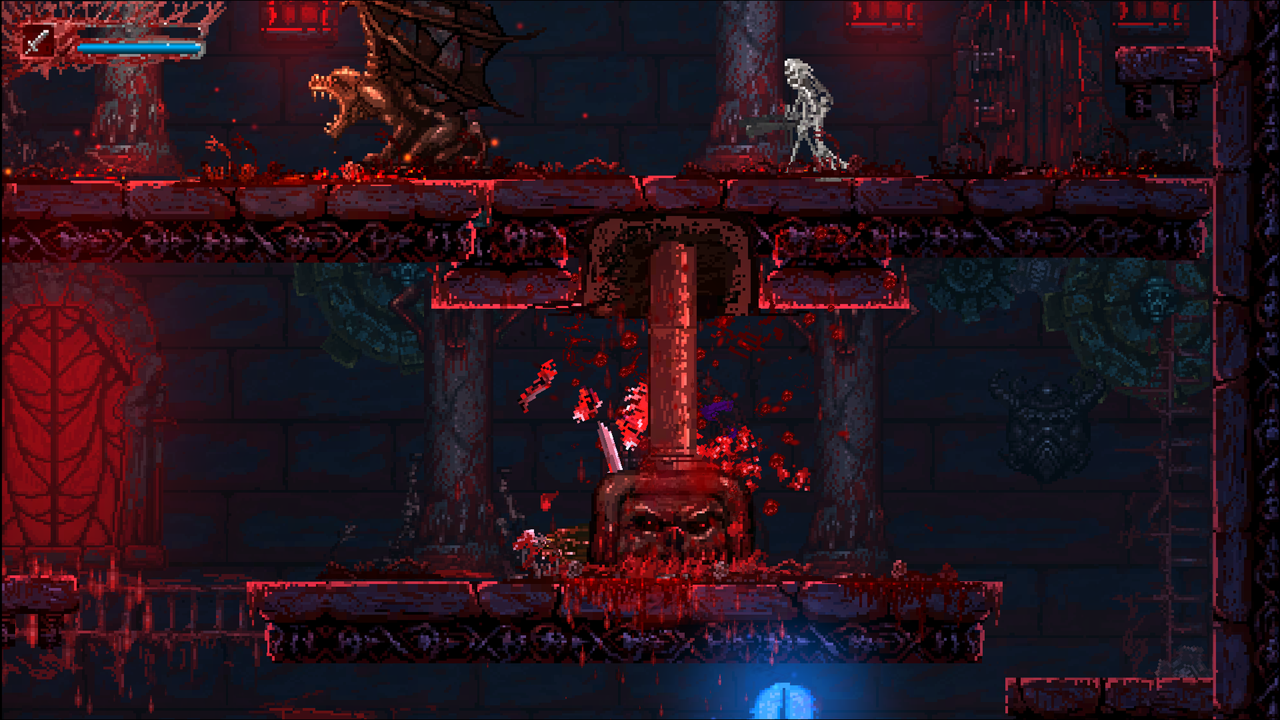 Sure you can sling a spirit fireball here and there and find the occasional hidden collectible, but that’s pretty much the game in a nutshell. However, there is something to be said about the simplicity of the gameplay and the predictability of the enemy encounters. It makes picking up the game easy and allows you to just sit back, enjoy the metal soundtrack and decapitate the odd monster or twenty. Which is A-Ok in my book.

There Shined a Shiny Demon 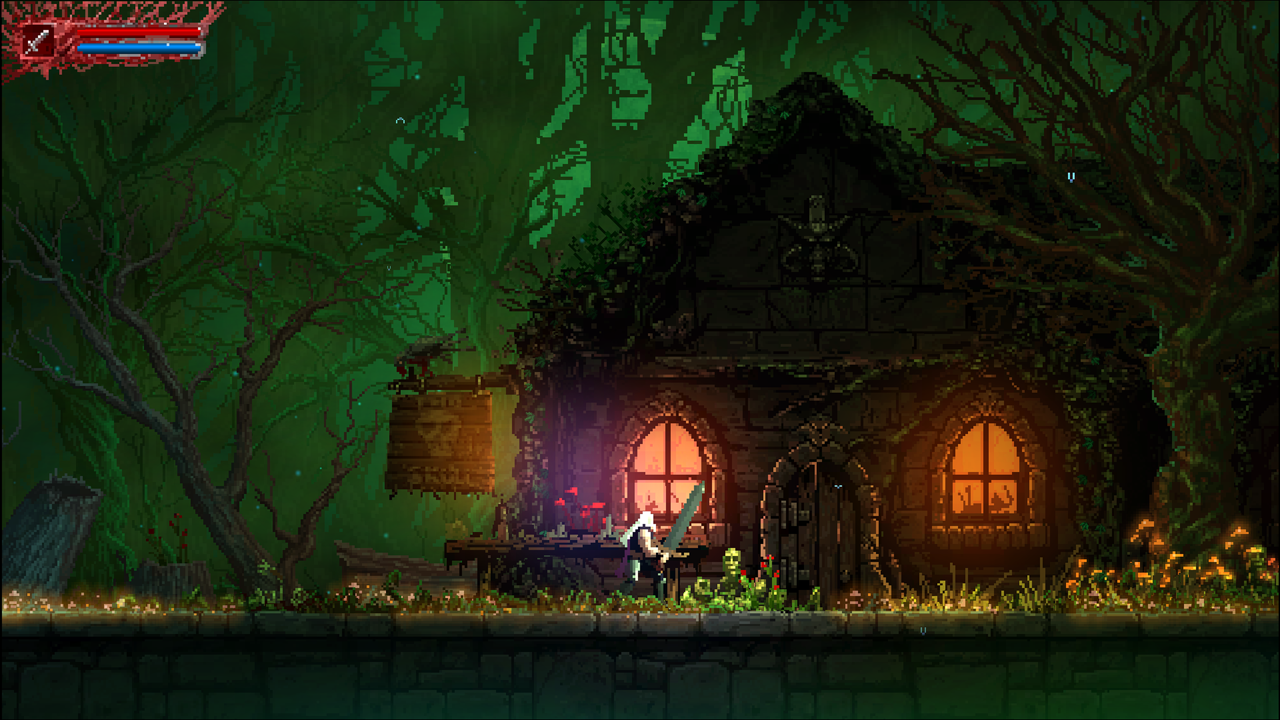 What really brings it all home for me while playing through Slain, is its art direction. I’ve always loved Gothic fantasy aesthetics and Andrew Gilmour, the developer of the game, did a superb job of bringing it to life. From dark and looming fortresses, to craggy dead forests, to chilling and oppressive tundras the detail is exquisite and intricate. The character animations are top notch and buttery smooth making Slain a treat to witness! I mean how many other games can you witness the main character head banging over the corpse of his latest felled beast in 60 FPS?

As I mentioned earlier, enemy variety is a bit lacking with slight changes to their palette or move sets, but honestly it wasn’t enough to really take away from the experience. Generally you’re too busy trying to avoid death to even notice! And the unique and intimidating bosses all make up for it in the end anyway. 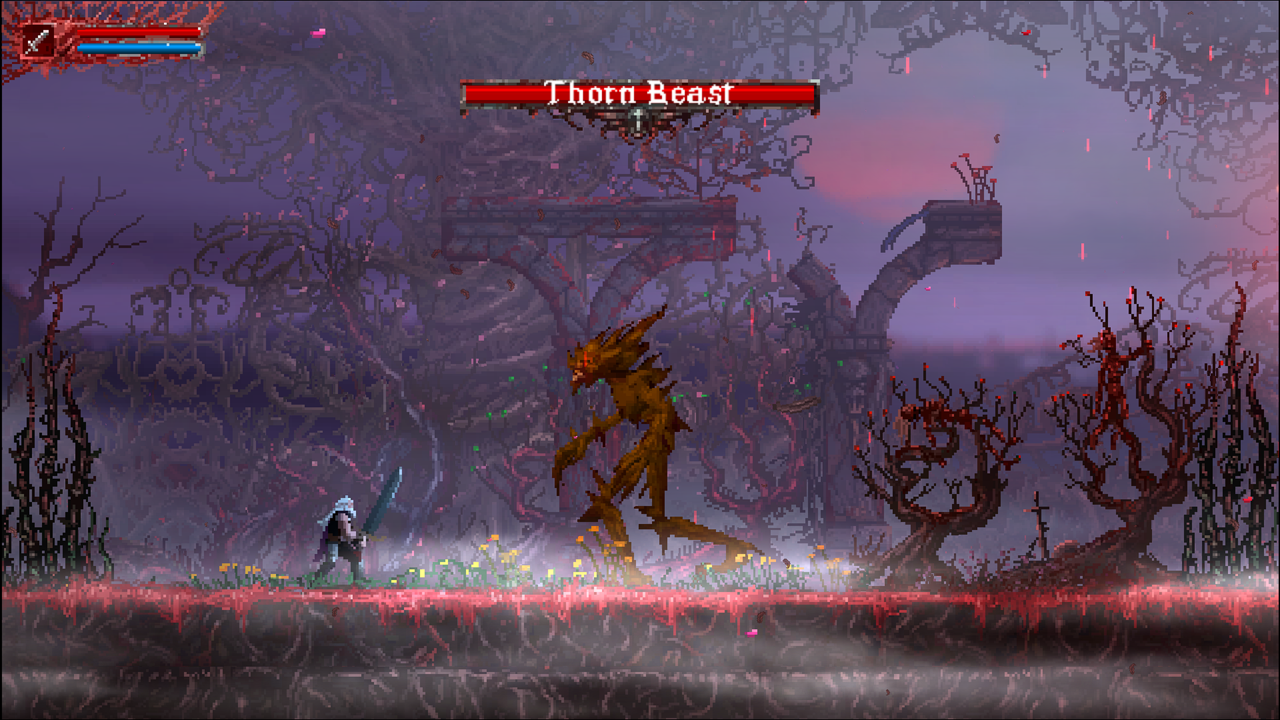 I would also be remiss if I didn’t mention Slain’s soundtrack. Metal to the core and suites the game to a tee, but if I’m going to be perfectly honest it wasn’t as hard rocking as I was hoping. When I think of metal I think of something fast paced, aggressive and neck injury inducing. Where Slain’s soundtrack was much more plodding and deliberate. Which certainly isn’t a bad thing, I can more than appreciate that, but it did little to make my blood pump and adrenaline rise.

Metal to the Core 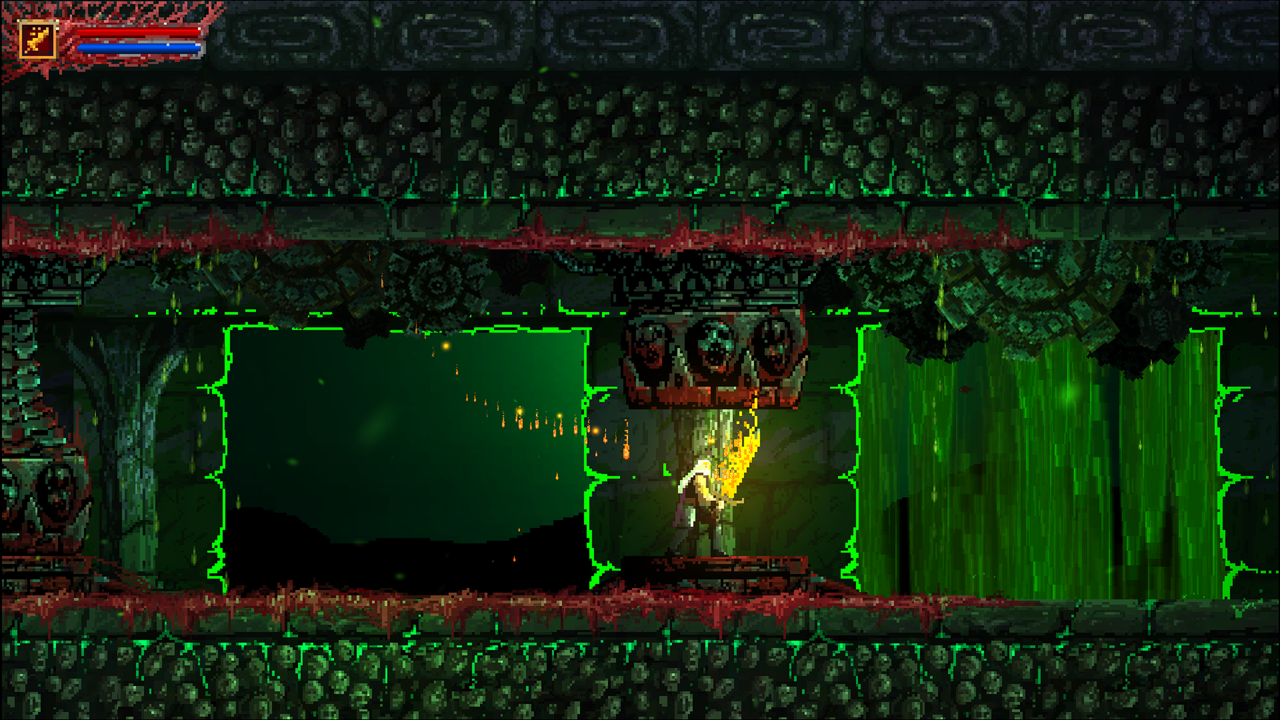 Although Slain had some kinks here and there and a few missteps in the gameplay department it was still overall an enjoyable experience. The game hearkened back to days long past where it’s style and genre reigned supreme in the 16 and 32 bit era. I think that’s probably what initially drew me to it.

So, should you go out and spend your hard earned cash on Slain? Well, I think as a whole package, I’d say definitely give it a shot. Especially if you have fond memories of games from the era it drew its inspiration from and doubly especially if you find it at a decent discount. It was a fun ride and you can see the love and effort that went into it. And for that reason alone I think it’s more than worth it. Just don’t let your mother find you playing it! ?

What are your thoughts on Slain: Back from Hell? Would you like to see more games like it?

You can also check out my initial impressions of the game over on YouTube: Game Bites | Slain: Back from Hell

Original images and screenshots created by The Backlog Odyssey

Have you ever had a genre of games that you always wanted to try, but you just never do? In fact, you […]

For a lot of people Mondays are the most insufferable days on the calendar. For Yu that feeling seems to be mutual […]

New Year, New You! Even though we are still pretty early into the new year, I’m sure most of us are already […]

What if you took a well established genre and turned its mechanics on its head? Let’s say for example, you took a […]

Slain: Back from Hell
Played On